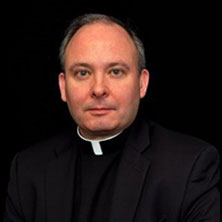 Ordained a priest of the Diocese of Paterson in 1989, Monsignor T. Mark Condon, J.C.D., is a 1985 graduate of Seton Hall University (B.A.) and the College Seminary of  the Immaculate Conception, Saint Andrew's Hall.  After receiving a Master of Divinity from Christ the King Seminary and after being ordained, he served as parochial vicar and in the Marriage Tribunal.  He then studied Canon Law at The Catholic University of America, receiving a licentiate in 1995 and a doctorate in 2009.  Monsignor Condon has served as Priest-Secretary to the Bishop of Paterson, Vice Chancellor, Defender of the Bond, Promoter of Justice, and Director of Worship and Spirituality in the Diocese of Paterson.  Presently he is Pastor of Our Lady of the Holy Angels Parish in Little Falls and Vicar General and Moderator of the Curia of the Diocese of Paterson.