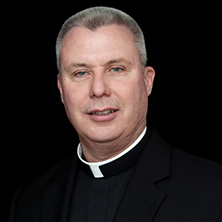 Ordained in 1985 for the Diocese of Paterson, Fr. Manning was appointed Vicar for Evangelization and Executive Director of St. Paul Inside the Walls by Bishop Serratelli in June of 2012. His vocation was nurtured, as the eighth of ten children, in the faithful home of his large family, and was discovered while studying wildlife management at Virginia Tech. After completing undergraduate studies in philosophy, he earned an S.T.B. and M. Div. at St. Mary's Seminary and University in Baltimore, MD. He has ministered in parishes as parochial vicar, priest in residence, and pastor. As diocesan vocation director for ten years, he worked with men and women in discernment and formation. He served in the field of education for nineteen years as chaplain, theology teacher, and president of a Catholic high school, and, most recently, as Vicar for Education.

Fr. Manning sees his past priestly assignments as providential preparation for his current work and is excited to be engaged in the ministry of the New Evangelization. Convinced that God reveals himself in truth, goodness and beauty, and most especially in a relationship with Jesus, the Lord, he feels blessed to be living and working at St. Paul Inside the Walls, where these are sought and encouraged.