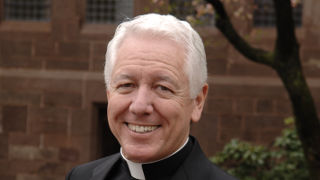 Monsignor Robert Sheeran was the 19th president of Seton Hall University, having been appointed to the position in December 1995. His tenure as chief executive of New Jersey's oldest and largest Catholic institution of higher education has been notable for remarkable growth and progress in many areas, times of trial and difficulty for the University community and our nation, and a bold strategic vision that has ushered Seton Hall into a new century.

Born in Troy, New York, Robert Sheeran graduated from Bergen Catholic High School in Oradel before enrolling in 1963 as an undergraduate at Seton Hall. In 1967, he was awarded a bachelor's degree in classical languages and began studies for the priesthood in Rome at the North American College. He was ordained at Saint Peter's Basilica in December 1970 and received a licentiate degree in theology (S.T.L.) in 1971 from the Jesuits' Gregorian University in Rome.

Upon his return to the United States, Monsignor Sheeran served as associate pastor of Saint Michael's Parish in Cranford, New Jersey. During his three years there, he earned a Master of Arts in Theology from Princeton Theological Seminary. Returning to Rome in 1974, he served for four years as director of the advising program at the North American College. In 1979, he was awarded the doctoral degree in sacred theology (S.T.D.) from the Angelicum University in Rome.

His service as president has been the culmination of Monsignor Sheeran's close and nearly lifelong relationship with Seton Hall. Having studied at the University as an undergraduate, Monsignor Sheeran returned to his alma mater in 1980 to serve as rector of Saint Andrew's College Seminary and as a member of the executive cabinet of Reverend Laurence T. Murphy, then president of Seton Hall.

In 1987 Monsignor Sheeran was appointed assistant provost of the University, a position that gave him administrative responsibility for forging closer links between academic and student affairs. His important work there resulted in a marked decrease in undergraduate attrition.

Monsignor Sheeran completed Harvard University's Management Development Program in 1989 and was promoted to associate provost in 1991. Selected as a Fellow of the American Council on Education (ACE) during the 1992-93 academic year, he worked closely with the senior leadership of Saint Louis University. He also visited more than 50 colleges and universities in order to examine their leadership management practices and fund raising practices.

Upon his return to Seton Hall, he was appointed executive vice chancellor, a post he held until his appointment as president two years later.

At a celebration of Monsignor Sheeran's tenth anniversary as president,Marty Kropp, chief engineer in Facilities Engineering, presented Monsignor Sheeran with a small tree — to be planted on campus in spring 2006.

A Decade of Contributions to the University

Monsignor Sheeran's wide range of administrative duties has been complemented by his close involvement with the students and faculty of Seton Hall. For almost 10 years he participated in the University's Priest-in-Residence Program, living in Xavier Hall, a residence for some 500 undergraduates. He taught a number of undergraduate courses in the Department of Religious Studies, including Christian Spirituality, Christian Belief and Thought, and Religious Dimensions of Life.

Among his many University-wide contributions, Monsignor Sheeran served as chair of Seton Hall's Human Relations Council.

Monsignor Sheeran also has an active role within Catholic higher education. In 2003, he was appointed to the Board of Directors of the Association of Catholic Colleges and Universities (ACCU). Founded in 1899, the ACCU is a voluntary association of regionally accredited colleges and universities in the United States. He is a member of the Executive Board of the New Jersey Presidents Council, a 50 member board representing New Jersey's public, private, and community colleges and universities.

Most recently, Monsignor Sheeran was appointed to the Bishops and Presidents Committee of the United States Conference of Catholic Bishops.

Monsignor Robert Sheeran's decade-long tenure as president of Seton Hall, through arguably the most challenging and dynamic period in Seton Hall's 150 years of leadership in Catholic education, has been marked by a creative vision and an untiring energy.

Addressing the Seton Hall community at his investiture in March 1996, Monsignor Sheeran issued a challenge to the University's faculty, administrators, staff and alumni: He called on them to look, first and last, to students –to their needs, their goals, their future. In return, Monsignor Sheeran promised to take the lead in creating an environment where everyone at the University is free to flourish.

"This begins with our physical world," Monsignor Sheeran insisted, "including not only a financially secure campus,but one with beautiful grounds and attractive, well-equipped buildings." But that is only the beginning. "Our environment includes not only the visible, but intangible realities as well," he continued. "I am committed to a campus marked by mutual respect and hospitality, where we strive to acknowledge each other's contributions and benefit from America's rich, growing diversity." 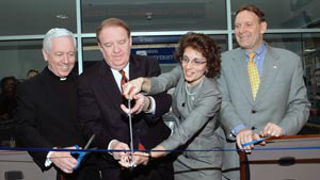 Monsignor Sheeran has shown, from the beginning of his presidency, that he is "a hands-on participant in the life of the university." His leadership has been aimed at positioning Seton Hall among the nation's foremost Catholic universities. Much has been achieved, with Seton Hall ranked among the top 125 universities in the country by U.S. News and World Report, and many academic programs ranked even higher.

From the beginning of Monsignor Sheeran's term as president, there have been no initiatives at Seton Hall more important or more carefully considered than those impacting the classroom. The core curriculum that has been in development by the faculty promises to be what he terms "the signature experience" for undergraduates.

Support for academic innovation has resulted in dramatic changes in the way professors teach and in the way students learn. Central to this has been Seton Hall's comprehensive effort to integrate technology into the learning environment. The University's innovative Mobile Computing Program won wide recognition, several years ago, with Forbes ranking Seton Hall as one of the "Most Connected College Campuses" in the country.

New and enhanced programs in education, healthcare, communications and law have been brought to fruition, and most recently the field of diplomacy, with the founding of the School of Diplomacy and International Relations, and science, with new degrees and the Science and Technology Center under construction on the site of McNulty Hall.

Of course, much learning – and much of what the college experience is all about – goes on outside the classroom. With this in mind, Monsignor Sheeran has focused the University's attention and resources on a model of student development that seeks to create a learning community – and not just a place to go to school. "Scholarship, in a real sense, is a matter of the spirit," Monsignor Sheeran has remarked. "We achieve very little if we produce only graduates and not good people." 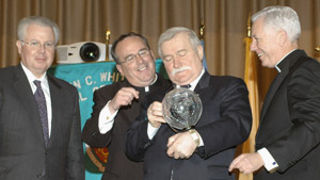 The University's commitment to the complete education of its students – in mind, heart and spirit – has not gone unnoticed: Seton Hall has been singled out for praise by the editors of The Templeton Guide: Colleges that Encourage Character Development.

In this regard, Seton Hall's fundamental identity as a Catholic university is crucial. Monsignor Sheeran has insisted upon this time and again. "Our identity must go beyond crosses on top of our buildings. We must seek new ways to bear witness to the revelation of Christ, to the moral values of all religious people, and to our Catholic intellectual heritage. That is what defines a Catholic university."

The work of the Center for Catholic Studies; the exhaustive review of the moral and ethical dimensions of life at Seton Hall conducted by the Bayley Project; the ongoing service of our students through Campus Ministry and other programs; and the faithful and caring response of the University family to deep sorrow and devastating loss: All these and more give witness to the vitality of the Catholic community that is Seton Hall.

Initiatives such as the Urban Institute, with roots deep in the Newark community, and the creation and expansion of programs such as the Unanue Latino Institute have also been hallmarks of the Sheeran era at Seton Hall.

The School of Diplomacy and International Relations, has achieved recognition for its pioneering partnership with the United Nations and its role in bringing to the Seton Hall campus an array of world leaders who have included Mikhail Gorbachev, the former president of the Soviet Union; Shimon Peres, the former prime minister of Israel, and Lech Walesa, the former president of Poland. In addition to the World Leaders Forum, the University hosted e Dialogue Among Civilizations as the U.N.'s designated secretariat for that historic confluence of global thinkers and political leaders.

"Working together," Monsignor Sheeran has written, "joining hands across disciplines and departments and traditional roles, we have distinguished ourselves as a University of academic rigor and intellectual intensity, grounded in a moral and spiritual vision." He has brought this vision to bear in uplifting Seton Hall's academic programs such as education and human services, nursing, life sciences, communications and fine arts – in addition to improving the well-being of the students themselves, both residential and non-residential, graduate and undergraduate members of the community. 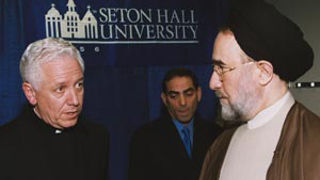 As Seton Hall marked the sesquicentennial year since its founding by Bishop James Roosevelt Bayley in 1856, Monsignor Sheeran presided over a university community dedicated to making key long-term goals a reality,including a historic $150 million campaign called Ever Forward. The campaign funded new facilities and larger endowments, ensuring that Seton Hall will continue to grow and meet the needs of the next century and beyond.

Alumni participation in the life of the University has grown over the past decade and is the source of particular pride and satisfaction for the former president. He has traveled the country to meet with Seton Hall alumni and to encourage the formation of regional chapters, which now number more than a dozen nationwide.

Ground has been broken for a state-of-the-future Science and Technology Center on the site of McNulty Hall. The Chapel of Immaculate Conception, a jewel of the campus and long-time spiritual center for the entire community, underwent major renovations to preserve the structure and enhance its worship space. A new University Center will one day meet the needs of students, teachers and visitors. The athletic program has undergone a major repositioning, and student athletes as well as fans will soon see the results of increased funding. Improved facilities for students, athletic teams and coaching staffs have been approved, which have enhanced the utility of the old Walsh Gymnasium foundation of the Recreation Center.

When the community marked the 10th anniversary of his appointment as president in a modest but moving ceremony, Monsignor Sheeran credited God for all that is good and all that has been accomplished at the University he leads.