Dean Marie Foley Honored by the Institute for Nursing 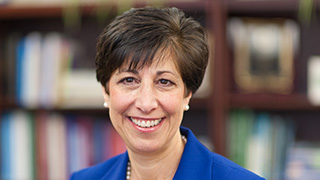 Marie Foley, Ph.D., R.N., dean for the College of Nursing at Seton Hall University was honored by the Institute for Nursing at the annual Diva and Don Gala on Thursday, April 4 at the Hyatt Regency in Princeton, New Jersey for her extraordinary contributions to the nursing profession in the state.

The Institute for Nursing sponsors the Diva and Don Gala in recognition of nursing leaders who have engendered high standards of excellence through shared commitment to quality patient-centered health care. In response to The Institute of Medicine's call for a more interprofessional approach to education, collaboration and teamwork, Dean Foley has played a significant role in guiding the College of Nursing through transition to address the most current issues in healthcare and training. As part of the University's new Interprofessional Health Sciences (IHS) Campus, the College, along with the School for Health and Medical Sciences and The Hackensack-Meridian School of Medicine at Seton Hall University, is poised to become an innovator in the concept of team-based education and training utilizing the latest in technology, theory and methodology. The results will assist in transforming the future of healthcare worldwide.

According to Foley, "Patients in hospitals are much sicker today than in the past. Nurses need to be able to make quick decisions and good clinical judgements. There also are an increasing number of nursing positions outside of hospitals, and more jobs are moving into the community. To compete, our students must have clinical experiences in settings where they will be prepared to deal with the new nursing landscape in which nurses are increasingly becoming the gatekeepers in health care."

Under Foley's leadership, in addition to her work with the IHS partnership, the College of Nursing undergraduate program has added four Dedicated Education Clinical Units with clinical agencies throughout the state, five Honors experiences, and developed the College's Undergraduate Leadership Program within the Seton Hall University Buccino Leadership Institute. On the graduate level, the College of Nursing has been ranked in the top 100 schools nationwide by U.S. News and World Reports for 2020 in the areas of Masters of Science in Nursing (M.S.N.), Doctor of Nursing Practice (D.N.P.) and Online Graduate Nursing Degrees.

Although Dean Foley has held various instructional positions at the University since 1985, she joined the nursing faculty with the rank of associate professor in September 2005, and was named chairperson of the graduate department in 2012. She served as the acting dean of the College in August 2014 and was officially appointed to the position in February 2015 after a national search.

Seton Hall University interim President Mary J. Meehan stated, "Marie Foley's career has been marked by exceptional dedication to the nursing profession and the training of future nurses. She exemplifies many of the qualities we strive to instill in our nursing students, including consummate skill and abundant concern for those who are in her care. The accomplishments of our graduates are a direct reflection on her leadership."

Foley earned her B.S.N. from Fairleigh Dickinson University and both an M.A. and Ph.D. from New York University. She has received numerous awards and distinctions, including the Outstanding School Nurse Educator Award from the National Association of School Nurses (2013) and the Research Article Award from the Journal for Specialists in Pediatric Nursing (2012). She has presented at international, national and regional research conferences on topics related to ADHD, child temperament, parenting, mentoring new faculty and issues related to school nursing practice and education. She is a member of the American Nurses Association, National Association of School Nurses, the National Board of Medical Examiners, The New Jersey School Nurses Association, Sigma Theta Tau International, Eastern Nursing Research Society and the National League for Nursing.