47th Annual Haley Awards Recognize the Past and Future in Nursing The 2018 Margaret C. Haley Awards were held on October 29, honoring distinguished graduates from the College of Nursing who have influenced an ever changing healthcare industry for the better. The ceremony took place this year in the new Bethany Hall, a first for the event, which served as a perfect venue for faculty, current students and alumni to re-connect, network and reminisce about their collective history of an institution that, according to each of the honorees, provided the foundation for a career that changed their lives and those of countless others.

Dean Marie Foley began the evening by acknowledging the many attendees representing a 50-year legacy of excellence through the College of Nursing. Among these were the Golden Pirates class of 1968 and members of the newly re-formed Alumni Association of the Seton Hall College of Nursing, first organized in 1947. She then shared the many achievements of the College over the past year. Most significant among them was the first official semester as part of the new Interprofessional Health Sciences (IHS) Campus in partnership with the School of Health and Medical Sciences and the new Hackensack Meridian School of Medicine at Seton Hall University. The new campus features state-of-the-art simulation labs and classrooms and will be a pioneer in the interprofessional approach to educating and training students from all three schools. According to Dean Foley, students from the College of Nursing and the School of Health and Medical Sciences participated in their first IPE on November 5. She stated, "We have only just begun to develop interprofessional education experiences."

The dean then announced that the United States Department of Health and Human Services, Substance Abuse and Mental Health Services Administration had just awarded an interprofessional training grant to all three IHS schools designed to expand patient access to medication-assisted treatment for opioid use disorder. The proposal was approved with a $404,905 commitment over three years. She thanked Project Director and Associate Dean for Graduate Studies and Research Kathleen Neville on behalf of the College of Nursing who, with colleagues in the School of Health and Medical Sciences and the School of Medicine, will participate in educating, nurse practitioner, physician assistant and medical students collaboratively to address the rising opioid epidemic.

When the time came to introduce the evening's honorees and bestow their awards, their acceptance speeches were brief, yet effusive in the shared notion that Seton Hall and the College of Nursing provided an incomparable foundation for their future in the nursing profession.

Alexa Birchenough, this year's Elizabeth Ann Seton Young Alumni Award winner, thanked the College for "the mentors and preceptors that have shaped me into the nurse I am today." Francis Hwang, recipient of the Nelson Aquino Humanitarian Award, credited "my instructors with encouraging me to never stop learning, particularly Professor Ulak and Professor Sternas for believing in me and pushing me hard." It was Associate Professor Linda Ulak who nominated Hwang and was bursting with pride as she stood to take photos of her former student. George J. Hebert Leadership Award winner Laurie Sherwen stated, "I came to Seton Hall as an R.N. because I was told it was important to get my B.S.N. I thought I knew everything already; however, I realized just how much more the faculty could teach me – and it was a lot. Thank you to the College of Nursing and Sister Agnes Reinkemeyer (third dean of the College of Nursing) for encouraging me to get my Ph.D., at the time, so I could come back and teach at SHU. I did get my Ph.D. and I've worked at many other places as faculty, and Dean. But now I can look forward to finally coming back and serving on the Dean's Advisory Committee."

The recipient of the evening's award of title is president of Lehigh Valley Hospital-Pocono, so she was quite used to delivering detailed speeches with passion, commitment and a bit of humor. The 2018 honoree for the Margaret C. Haley Award, Elizabeth Wise, began her award acknowledgement by pointing out that her grandmother had recently passed away at the age of 108. She remarked that if she were to make it to that age herself, she would request the College to award her "not just Golden but Platinum Pirate status." She followed with, "Don't ask me why I wanted to be a nurse at four years old. The only thing I can think of may be all those Cherry Ames novels." According to Wise, Seton Hall was her only application. However, she continued, "I made a wise choice. This school provided the clinical and developmental ability to lead. My father died in May during my time in the program. As you know, that is a crucial time for final exams. The faculty worked with me, allowing me to complete my work when I was ready to return. That's the difference here. Good leaders nurture new ones." In closing, Wise expressed her gratitude to everyone who helped her along the way: "Thanks to mom for paying my tuition after dad died. Thank you Margaret Haley for blazing the trail, and to the faculty here for countless hours preparing me to be a successful future nurse. Finally, thank you to the patients for the privilege of letting me share a small part of your lives caring for you."

Elizabeth Wise '87 is the honoree for the 2018 Margaret C. Haley Award. She is the President of Lehigh Valley Hospital-Pocono (LVH-P). For more than two decades she has held leadership positions at health care systems throughout the eastern United States. Prior to her role as President of LVH-P, for two years Wise served as the chief operating officer and chief nursing officer at Pocono Medical Center and Pocono Health System.

Elizabeth Wise earned a bachelor's degree in nursing from Seton Hall University in South Orange, NJ and a master's degree in nursing as well as a master's degree in business administration from Rutgers University in Newark, NJ. She is a member of numerous professional organizations and Board appointments including the American Red Cross and the American College of Healthcare Executives. Elizabeth is currently a Fellow in the Academy GE Fellows Program for Administrative Executives.

Francis Hwang '06 is the recipient of the Nelson Aquino Humanitarian Award. He is a board certified adult nurse practitioner who specializes in orthopaedic surgery (oncology and sports medicine) at Johns Hopkins Medicine. He completed his Bachelor of Science in Nursing at Seton Hall University and then earned his Master of Science degree at Fairleigh Dickinson University in New Jersey. He is currently back in school to pursue a Doctor of Nursing Practice (D.N.P.) degree at Johns Hopkins School of Nursing in Maryland.

Francis Hwang began his career in health care in the U.S. Army in 1997 as a combat medic, when he was just 17 years old. Since that time, he has logged over 20 years of experience in various areas of patient care (patient transporter, emergency medical technician, emergency room nurse, cardiothoracic intensive care unit nurse, organ procurement member, operating room nurse, and nurse practitioner in trauma surgery and in orthopaedic surgery).

In addition to being a clinician, Hwang loves teaching nursing students as a part-time clinical instructor at the Johns Hopkins School of Nursing and wishes to pursue a career as a future nursing educator.

The George J. Hebert Leadership Award was given to Laurie Sherwen '70. She graduated with her B.S.N., Summa Cum Laude, from Seton Hall University College of Nursing in 1970, and was awarded the Ann Murphy Award for academic achievement. After serving as a pediatric staff nurse at the University of Medicine and Dentistry of New Jersey, she attended New York University for her M.A. and Ph.D. degrees. Laurie served on nursing faculties at New York University and Rutgers University in the specialty of parent-child nursing. She moved, in 1985, to the March of Dimes as the project director of the Maternal/Infant Core Competency Project, funded by the Division of Maternal-Child Health, Department of Health and Human Services. Sherwen returned to academia in 1988, taking a position at Thomas Jefferson University Department of Nursing as the nurse researcher, and later moved into the position of director of the graduate program. In 1995, Laurie became the dean of the School of Nursing at The College of New Jersey, and from there took the position of dean of the Division of the Schools of the Health Professions, Hunter College, CUNY. In 2008, she accepted the position of dean, Samson College of Health Sciences, University of the Sciences. Sherwen retired in 2015.

During her long academic career in nursing, Laurie Sherwen has had many accomplishments. She received funding for her research and training activities concerning perinatal-transmitted HIV infection from the National Institutes of Health, the U.S. Department of Education, the U.S. Public Health Service, and the March of Dimes. She is author or senior co-author of 27 refereed publications, eight authored and edited books, and numerous chapters, non-refereed articles and monographs.

Alexa Birchenough '14 received the Elizabeth Ann Seton Young Alumni Award and is a Nurse Clinician in the Congenital Cardiovascular Intensive Care Unit at Hassenfeld Children's Hospital at NYU Langone. She holds a Bachelor of Science in Nursing (B.S.N.) from Seton Hall University and is completing her M.S. in Nursing Administration at New York University. After shadowing an emergency room nurse in high school, Alexa was selected for the New Visions Program for high school seniors, providing them with the opportunity to divide their class time between traditional high school curriculum and rotations at Geneva General Hospital. From there, Alexa attended Seton Hall University where she graduated Cum Laude with her B.S.N. Alexa began her career as a nurse at New York-Presbyterian Hospital within the Cardiac Telemetry Unit, moving to NYU in 2016. 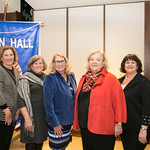 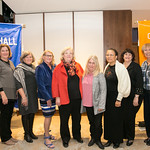 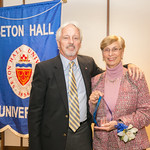 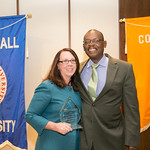 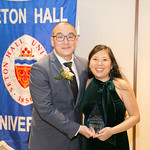 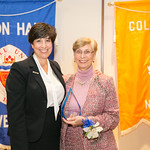 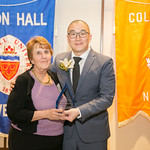 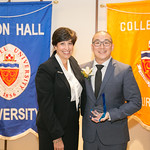 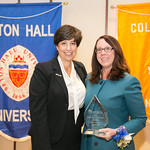 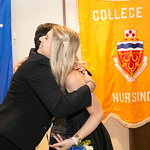 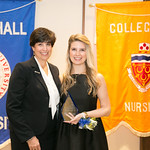 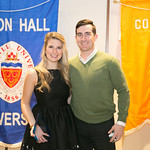