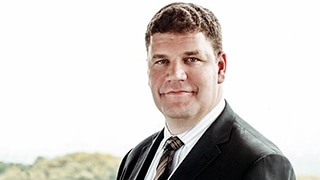 Jon Paparsenos '99, an international leader in higher education philanthropy, has been selected as Seton Hall's next Vice President for University Advancement.
Paparsenos comes to Seton Hall from the University of New South Wales (UNSW) in Sydney, Australia, where he has served as Vice President, Philanthropy and CEO of the UNSW Foundation since 2016. He will officially begin his new position on November 2, 2020.

A former student-athlete, Paparsenos brings an impressive track record of developing the philanthropic culture of institutions while surpassing benchmarks for giving. Throughout his career, he has led high-performing teams that exceeded financial goals and amplified engagement with key stakeholders.
He will lead the Advancement Division in integrating development, alumni relations and advancement services more fully into the life of the Seton Hall community, in preparation for the University's next comprehensive fundraising campaign, the planning for which is already underway.

"Jon has impressed me as someone who cares deeply about Seton Hall, our mission and our students," said Joseph E. Nyre, Ph.D., president of Seton Hall. "His wide experience and remarkable track record as a fundraiser and advancement leader make him the ideal person to lead Seton Hall to new heights in philanthropy and engagement."

At UNSW, he was charged with bringing U.S.-based fundraising methods and strategies to Sydney. With a mandate to effect large-scale change, he developed an ambitious plan to build a centralized philanthropy operation and commence UNSW's inaugural fundraising campaign.

Under his leadership, fundraising at UNSW increased from $30 million in 2015 to $101 million last year. With the UNSW campaign about to enter its public phase, Paparsenos' team has achieved fundraising that is 10 percent above the benchmark, and has grown alumni engagement by 500 percent.

"As a Seton Hall alumnus, former student-athlete, volunteer and donor, I am excited to have the opportunity to work for — and give back to — the University that provided me with training and opportunities, and inspired me to be where I am today," Paparsenos said.

A former Marine Corps sergeant, he coordinated and maintained combat readiness for 11 units, and is the recipient of the Navy and Marine Corps Achievement Medal.