US Ambassador to the UN at Seton Hall Following President Barack Obama's final State of the Union Address, the U.S. Permanent Representative to the United Nations, Ambassador Samantha Power, came to Seton Hall to hold a town hall meeting with students on some of the foreign policy themes raised by our nation's commander in chief.

The program - hosted by Seton Hall's School of Diplomacy and International Relations- is the most recent in an impressive series of events featuring women who are global leaders including Ambassador Susan Rice and Nobel Peace Prize recipient Leymah Gbowee.

The discussion was moderated by David Ushery, news anchor at NBC 4 New York, and attended by reporters from the Associated Press, Buzzfeed, NJTV, News 12 and a host of other media outlets. Beyond the walls of the packed auditorium, more than 200 people tuned in for a live stream of the conversation. A number of international refugees also attended, lending a personal and concrete dynamic to a wide-ranging conversation. Dean Andrea Bartoli of the School of Diplomacy introduced Ambassador Power, noting the impact of words in the world and in the peace process in particular. Quoting Pope John XXIII, he said: "Seek what unites, not what divides."

In her opening remarks, Ambassador Power praised Seton Hall students and their dedication to a tradition of volunteerism and activism, saying this tradition of service "is in keeping with the vision and service of Seton Hall's founder, Bishop James Roosevelt Bayley, who found his way to his Catholic faith working with poor immigrants in Harlem. And it is in keeping with this school's long tradition of embracing people of all faiths, ethnicities, and nationalities - including refugees." Regarding the reputation of the United States globally, Ambassador Power noted that her position at the UN gives her "a unique vantage point into how other countries view the United States." She added that: "Our challenge is that people around the world look for America to lead in every single crisis and sometimes believe that, because of our strength and our capabilities that we can solve and fix every problem by ourselves."

America, Ambassador Power explained, has indeed often "led the way." She noted that "hundreds of thousands - if not millions - more people might have died if the United States had not catalyzed a global response to stop Ebola's spread."

Ambassador Power went on to say that the U.S. marshalled a coalition of 65 countries to confront ISIL militarily, financially, and "to counter the spread of the venomous ideology that ISIL has used to attract recruits and to fuel terror." She reminded the audience that American leadership helped bring nearly 200 countries together to reach "the most ambitious agreement in history to fight climate change." Ambassador Power praised communities and individuals who have welcomed those fleeing persecution, oppression and armed hostilities. She admonished those who would deny these seekers of asylum a home in the United States. "We recognize that one of our greatest strengths, and a major reason that the world looks to the United States to lead, is our values. Yet lately, we're hearing more and more people calling for actions that would compromise those values, or outright contradict those values."

She continued, "The world respects us not just for our arsenal; it respects us for our diversity and our openness and the way that we respect every faith. Compromising on those core values has never made America more secure - and it never will."

If you missed the event, you can still join the conversation #PowerAtTheHall on Twitter.

A Conversation with Ambassador Samantha Power 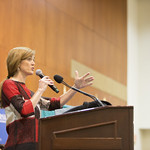 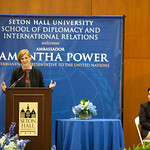 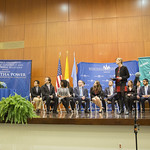 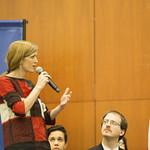 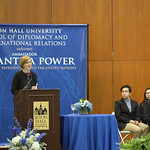 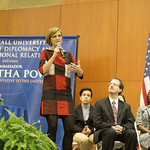 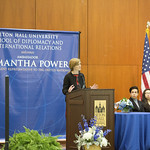 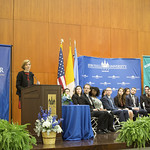 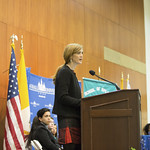 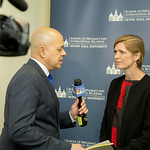 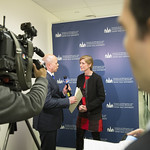 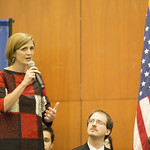