As the leaves start to change color and the breeze gets chillier, summer comes to an end, which also means the end to the Summer 2019 #Hallabroad Travel Photo contest! The contest was sponsored by the Office of International Programs and ran throughout the summer. Students, Faculty, and members of the Seton Hall community were asked to share their summer photos on any social media platform of their choosing, with #Hallabroad as part of the caption. The pictures could be from a study abroad trip, a service trip, an overseas trip, or a trip down the shore – as long as it was a part of your Summer 2019 adventures!

After months of receiving submissions on Instagram, Twitter, and Facebook, the OIP narrowed it down to six semifinalists who were put up against each other, 1v1, on the Seton Hall Instagram story for followers to vote on the 3 winners. With about 3,000 views and nearly 900 votes in each round during the 24-hour period, the results came in. In the round of "Ghana" vs "Skydiving," Skydiving won with 62% of the votes. The Costa Rica photo submission also won with 62% of votes when versing the Grand Canyon picture. The Rome photo won with 73% of votes against the Japan picture.

Jill Cancela, Class of '22, was the winner of the Skydiving picture. She originally planned to jump on her birthday in Sussex County, NJ, but due to the weather conditions, she had to delay this adrenaline-filling adventure. "I decided to go skydiving because I am obsessed with the sky. Whether it is a sunset, clouds on a rainy day or the way the sun peaks through behind a cloud, I am mesmerized by it," she explains. She recollects the moment as being the first time in her life in which she felt peace, although it ironically is typically a moment of fear to most. She was finally able to fulfill a promise she made to herself to be the first in her family to sky dive. Jill "highly recommends going skydiving at least once in your life. People tend to let fear take over, leaving them to miss out on some of the best things in life." 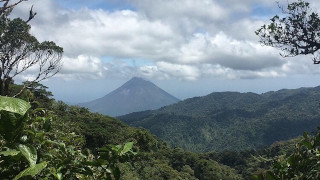 Hanna Wargula posted the image of Costa Rica. It was taken in Monteverde, Costa Rica, during a hike in the cloud forest. Specifically pictured in the scenic photo is the Arenal Volcano: an active volcano just 90 km northwest of San José, surrounded by the breathtaking bright green rainforest. Hanna was studying abroad in Costa Rica for Spanish immersion when she took the picture. "While the hike was a tiring ten kilometers at a high incline, I remember thinking it was worth it for this view at the top." Jennifer Da Silva was our final winner, posting the picture of herself in front of the Colosseum in Rome. Jennifer, along with other Seton Hall students, ventured around the ruins of Rome as part of a Seton Hall study abroad trip for the Italian language program. "I would pass the colosseum every day on my walk home from school" where she took Italian language classes, she reminisces. As part of the study abroad program, she got to stay with a host family and visit several places in her free time such as Siena, Florence, and even Barcelona for a weekend!

Among the 3 above-mentioned finalists were also the 3 other semifinalists: Megan Ogilvie, Kayla Rivers, and Kevin McKenzie. All the semifinalists' pictures will be displayed in the windows of the Walsh Art Gallery in November. Thank you to everyone who entered the contest and shared their summer memories with the Seton Hall community. Keep your eyes out – and cameras ready – for this contest to resurface in the future where maybe you can be our next winner!