Seton Hall Graduates 1,320 at the Prudential Center in Newark Seton Hall University celebrated its 161st baccalaureate commencement on Monday, May 21 at the Prudential Center in Newark, NJ. The University graduated 1,320 students with baccalaureate degrees, 588 graduating with honors. In addition, 1,084 graduate students will receive master's and doctorate degrees, making the total number of graduates this year 2,404 students. Delivering the commencement address was Jovita Carranza, the 44th Treasurer of the United States. The daughter of Mexican immigrants, Carranza started her career at United Parcel Service in the 1970s as a part-time night-shift box handler. More than 20 years later, she rose to the level of President of Latin American and Caribbean Operations at UPS and was the highest-ranking Latina in company history.

"Never miss an opportunity to make a difference," she told the graduates.

Appointed to her current position by the President of the United States, Treasurer Carranza's signature can be found on all United States paper money printed since the start of her tenure, warranting (much like the signing of a check) that "This Note is Legal Tender for All Debts, Public and Private." To commemorate the graduation ceremony at Seton Hall, each graduating student was given a $1 bill signed officially by Carranza.

The Treasurer, who received an honorary doctorate of humane letters from the University, reminded the new graduates that their education came as a result of a number of sacrifices and that "To whom much is given, much is required." She also challenged the students to "Do more than just be an example to others. In all you think and all you do, you must now be a leader. Your goal, I will suggest, is not to create lots of followers. Your goal, obtained by inspiring others, is to create more leaders."

"As you embark on successful lives and distinguished careers, I pray that you uphold the promise of your education. Pursue truth over personal gain. Value people more than possessions. Let your hearts be guided by compassion. Nurture those who follow you. Give without asking anything in return. And use the gifts Seton Hall has given you to champion people who have been excluded from the good fortune that many of us enjoy." The valedictorian address was delivered by Janina Andrea Alzate, whose parents immigrated from Colombia and Ecuador. Alzate, from Elizabeth, N.J., graduated Summa Cum Laude from the University's College of Education and Human Services with a B.S. in Education. Alzate majored in elementary and special education, received a speech honors citation, and held a second major in social and behavioral sciences, plus a minor in psychology. Part of the six-year education and speech-language pathology program, she will continue at Seton Hall to obtain her master's degree and plans to continue to work with children. She said, "As this chapter of our lives closes, take comfort that we are leaving with more than just a diploma. If we set sail with all the tools our soon to be 'Alma Mater' has equipped us with: a reflective mind, a true heart, faith and a strong moral compass, we will arrive on the shores of our destiny." Cardinal Joseph William Tobin, Archbishop of Newark said, "This is indeed a special day for all of the graduates and their families. It is a time to rejoice and say proudly that 'I am a graduate of Seton Hall University.' It also is a time to reflect on the next steps in their lives. I wish them all great success. I also suggest that they listen actively for and to the voice of God, and be open to Him pointing the way to the future." 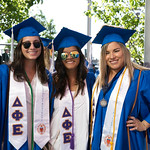 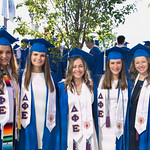 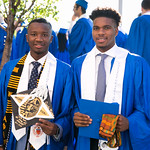 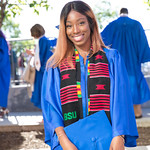 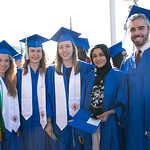 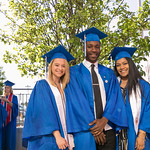 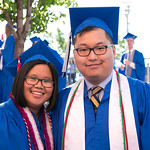 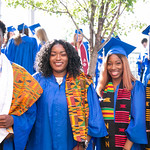 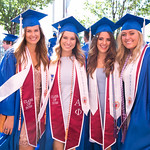 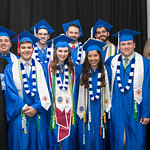 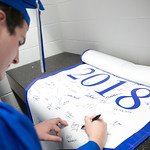 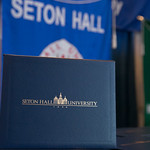