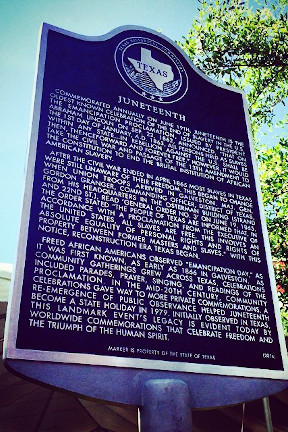 The Juneteenth marker in Galveston, Texas, courtesy of the Texas Historical Commission (thc.texas.gov)

President Lincoln issued the Emancipation Proclamation on September 22, 1862. It became effective on January 1, 1863. At that point of implementation of the proclamation, 90% of the African American population were enslaved, but it took almost three more years before the full emancipation of America's enslaved population occurred on June 19, 1865. Today, Juneteenth is celebrated as Black Independence Day by African Americans across the nation.

According to Kelly Harris, director of Africana Studies at Seton Hall University, July 4, Independence Day, has been celebrated as a national holiday since 1870. However, the celebration of independence for African Americans is rooted in three different dates: July 5, January 1 and June 19. Prior to the Emancipation Proclamation, African Americans in New York had a history of celebrating "independence" on July 5, since slavery was still an American institution. The first widespread "independence" celebration, better known as Watchnight Service, was December 31, 1863 in anticipation of emancipation on January 1, 1863. Watchnight Services are widely held in black churches across the country every year and reflects our "double consciousness." We celebrate emancipation and the New Year. The second celebration, Juneteenth, began June 19, 1865. On that day, Union General Gordon Granger arrived in Texas and proclaimed the end of slavery. Black people in Texas up to that point did not know they were legally free.

Juneteenth is now widely celebrated across the country and is a reminder that citizenship, freedom and patriotism have a lot of nuance for African Americans. Frederick Douglass famously captured this problem in an 1852 Fourth of July speech. He was asked by the Rochester Ladies' Anti-Slavery Society to deliver a Fourth of July address, and what followed was one of the more pulsating speeches in American history:

"Fellow citizens, pardon me, allow me to ask, why am I called here to speak today? What have I, or those I represent, to do with your national independence? Are the great principles of political freedom and of natural justice, embodied in that Declaration of Independence, extended to us? I am not included within the pale of this glorious anniversary.... This Fourth of July is yours, not mine. You may rejoice, I must mourn. To drag a man in fetters into the grand illuminated temple of liberty, and call upon him to join you in joyous anthems, were inhuman mockery and sacrilegious irony. Do you mean, citizens, to mock me by asking me to speak today?" 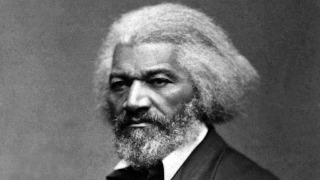 "Douglass, displaying his typical courageous witness and oratorical genius, captured why the Fourth of July celebrations are complicated and why Juneteenth is necessary. While most states (47) now recognize Juneteenth as a state celebration, it deserves a place as a national holiday. As the country continues to grapple with the protests around the murders of George Floyd, Breonna Taylor, Ahmaud Arbery and countless others, Juneteenth celebrations are an important component for a national reckoning with the past," said Harris.

University Libraries is actively involved in identifying resources to assist in research on African American history and related subject matter on digitization of records pertaining to the civil rights movement and anti-racism curriculum. They also are pursuing research on algorithmic bias and data ethics and a page specifically about how this intersects with disproportionate criminalization in black, indigenous and other people of colors (BIPOC) communities.

"To commemorate Juneteenth, I created a Juneteenth Guide that provides information on Juneteenth-related information and events that will be taking place in 2020. This is not meant to be the final product, but rather one that will continue to grow and develop. If there are any resources or information that you think should be added, please let me know as I am very interested in hearing other perspectives," said Chelsea Barrett, assistant professor and business librarian in University Libraries at Seton Hall University.

African Americans have never controlled the dissemination of their cultural narrative. Therefore they have a desire to have their full story told and appreciated, so that centuries of oppression, marginalization, demonization and systemic racism can be overcome.

The quest of African Americans and our allies for full equality under the law and in the hearts and minds of the American citizenry is a constant theme throughout our daily lives. Read the quotes below and listen to your heart as you reflect on the words of a few humanitarians.

"Struggle is a never-ending process. Freedom is never really won, you earn it and win it in every generation."
– Coretta Scott King, human rights activist and leader

"I prayed for freedom for twenty years but received no answer until I prayed with my legs."
– Frederick Douglass, leader in the abolitionist movement

"I had reasoned this out in my mind; there was one of two things I had a right to, liberty, or death; if I could not have one, I would have the other; for no man should take me alive; I should fight for my liberty as long as my strength lasted, and when the time came for me to go, the Lord would let them take me."
– Harriet Tubman, abolitionist and humanitarian

"Hold those things that tell your history and protect them. During slavery, who was able to read or write or keep anything? The ability to have somebody to tell your story to is so important. It says: 'I was here. I may be sold tomorrow. But you know I was here.'"
– Maya Angelou, literary icon and activist

"If the cruelties of slavery could not stop us, the opposition we now face will surely fail. Because the goal of America is freedom, abused and scorned tho' we may be, our destiny is tied up with America's destiny."
– Dr. Martin Luther King, Jr., civil rights leader

"Today and every day, we honor the sacrifices of our ancestors and remain committed to the work ahead. All Americans need to reflect on the admonitions of prophet Micah."
– Micah 6:8 New International Version (NIV)

To access the full collection of library resources for Juneteenth, visit here.