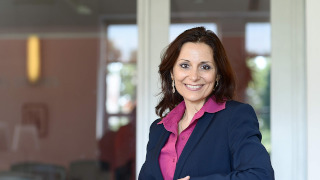 Provost Katia Passerini was interviewed by the Italian Cultural Institute of New York for Stanze Italiane, the virtual museum and website of the Institute, which was founded in 1961 by the Italian government. Under the leadership of the Ministry of Foreign Affairs, the Institute's mission is to promote Italian language and culture in the United States. Passerini was interviewed for a series called "Storie di New York."

Interviewed by Professor Vincenzo Pascale of Long Island University, Brooklyn, Passerini spoke about her experience at Seton Hall to date, noting that she was fortunate to arrive at the University "at the end of the first phase of the strategic planning process," allowing her to be involved "in further refining the strategic plan."

She further explained that now "The plan sets the direction forward for the growth of the University in many areas, from campus planning to new academic areas, research, and leveraging the strength of the University, which is our liberal arts and humanities tradition paired with very strong professional degrees in the sciences, business, law and diplomacy."

The Provost also noted the importance of "growth and quality" in the University's planning, especially as it regards "student experience," and "making sure that from when they arrive until they graduate, students have the best possible experience and learn not only the craft of their future career, but are placed into careers when they graduate."

Provost Passerini, who hails from Rome and holds degrees from both Italian and American universities, also discussed some of the differences between education in Italy and the United States, including five-year high school in Italy as opposed to four in the United States. "I think the approach that the Italian education system takes is to be very deep at the beginning, and that is a very good preparation that allows you to go into the specialty that you want to choose. So immediately you specialize in a profession," she said. "In the U.S. they take a lighter approach at the beginning and when you go to college you have to have that general education paired with that professional degree that you choose." The Provost further noted that although the skills taught in the Italian system were "very strong," she thought that "the strength and the beauty of the U.S. system is that you learn how to apply theory."

Asked what her "dream" for Seton Hall was, she replied "Of course I want us to be the best Catholic university not only in the United States, but also in the world. So, what I would really like to bring is an international dimension – we talked about diversity and culture – for me, diversity is really welcoming students from all over the world."

Passerini also said she looks forward to welcoming collaboration and partnerships with institutions from all over the world. Noting some of the unique contributions and abilities of relatively small but academically distinguished private institutions of higher education such as Seton Hall, Passerini further extolled the collaborative benefits available when faith-based and Catholic universities "like ours" come together. "I think we really have an opportunity to make a mark not only in the U.S., but well beyond."

Video of the full interview with the Italian Cultural Institute of New York is available through accessing Stanze Italiane and then clicking on the link in the leaf that says "Katia Passerini."