Alcohol is a leading risk factor for morbidity and mortality in the United States and worldwide. The third leading preventable cause of death in the U.S., 15.1 million adults have Alcohol Use Disorder (AUD), with an estimated 38 million adults in the country drinking too much. Binge drinking, also a concern, is described as 5 or more drinks consumed by men within 2 to 3 hours, and 4 or more drinks consumed by women in that timeframe. The cost to society has been measured at $249 billion, and it is reported that less than 10 percent of people with AUD get any treatment.

Antonio Noronha, Ph.D., director of the Division of Neuroscience and Behavior at the National Institute on Alcohol Abuse and Alcoholism (NIAAA) shared these facts with University faculty, students and staff during his National Institute of Health Grants Workshop on Neuroscience, Genetics & Behavioral Research at NIAAA: Research Priorities and Future Directions at Seton Hall.

Noronha met with more than 100 members of the University community as well as research colleagues from Rutgers University, William Paterson University and Temple University School of Medicine during his February 26 through 28 visit. University sponsors included the Office of Grants and Research Services, the Office of Government Relations and the Institute of NeuroImmune Pharmacology.

"The mission of the National Institute on Alcohol Abuse and Alcoholism is to generate and disseminate fundamental knowledge about the effects of alcohol on health and well-being, and to apply that knowledge to improve diagnosis, prevention and treatment of alcohol-related problems, including alcohol use disorder, across the lifespan," he explained. "Alcohol interacts with the whole body, and risk drinking produces intoxication and other impairments to the central nervous system (CNS), and harm to organs and body systems."

Looking ahead at research goals and opportunities in the next three to five years, he shared his expertise on the NIH grant funding process and mechanisms, inviting University researchers to participate in projects with the NIH and NIAAA. He discussed major areas of alcohol, areas of collaboration and preclinical and clinical medications development programs.

"We want to support the next generation of biomedical scientists," said Noronha, who has overseen the grants process for 36 years.

Professor Sulie L. Chang is director of the Institute of NeuroImmune Pharmacology, which has received more than $20 million in grants from NIH. Her own alcohol-related research has bridged the fields of neuroscience, immunology and pharmacology, including her latest work exploring binge drinking among teens leading to an increased "sensitivity" to opioids.

She speaks highly of the role of Noronha and the importance of having the opportunity to collaborate with NIH-funded researchers.

"It is a truly special occasion to have Dr. Noronha support these efforts to foster our research, traveling from Washington to Seton Hall for this extended visit and meeting with so many of our colleagues and researchers at both the Main Campus and IHS Campus. This is such an important area because alcohol abuse can cause damage to all ages from fetal to aged abuse while impacts health, society and the economy. That is why this scientific research is so important," said Chang.

In agreement is Nicholas Snow, Founding Endowed Professor in the Department of Chemistry and Biochemistry and Director of Research.

"It is exciting to hear what Antonio is sharing with us about opportunities to collaborate on future research projects with the NIAAA and NIH. For both our faculty and student researchers to be able to discuss relevant ideas that they are working on with someone of the stature of Antonio Noronha, who has been overseeing grants for more than three decades, and can help identify contacts to reach out to at government agencies, is a great first step in getting research funded."

He added, "This visit represents another step in our research trajectory of over 50 years since the inception of our first doctoral program. Our university has received a new research level designation in the latest Carnegie Classification as an R2 High Research Activity institution among doctoral universities. And to have Antonio visit and encourage further collaborative relationships points to another step in the expansion of our research programs." 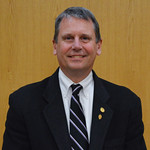 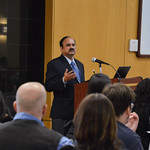 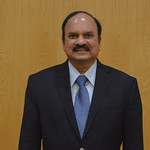 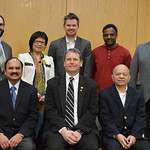 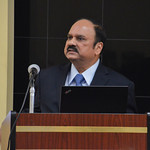 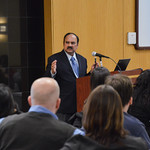 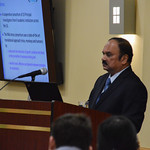 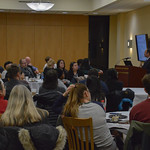 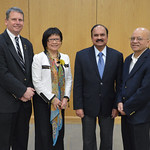 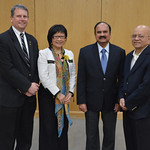