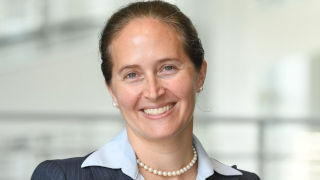 Law Professor Heather Payne is an emerging leader in the areas of environmental law, energy law, evolving regulatory policy, and the implications for property, both real and intellectual. A former chemical engineer and corporate executive, she brings a deep understanding of both the technical and economic implications of policies to address new realities in a carbon- and water-constrained world.

Employing both empirical and qualitative measures, her research explores regulatory policy, the changes necessary to implement the electricity grid of the future, and how consumers will become increasingly involved in the decision-making of regulatory bodies. In addition, her work asks whether coming regulatory changes will be in the public interest.

Her articles have been published in Environmental Law, William and Mary Environmental Law and Policy Review, Idaho Law Review, Pace Law Review, and the University of San Francisco Law Review. Forbes has called her research "critical reading for anyone who's interested in regulated electric utilities (or invests in them)."

Professor Payne was again recently featured in national news for her expertise on energy and environmental law. Interviewed about the legal disputes that followed the deadly winter storms in Texas, Payne appeared in ABA Journal, Law.com and The American Prospect.

In ABA Journal, the flagship magazine of the American Bar Association, which reports readership from half of the nation's 1 million lawyers every month, Payne differentiates the lawsuits in Texas from earlier cases prompted by power companies' negligence to maintain equipment starting dangerous California wildfires. In Texas, she clarifies that the weather caused the outages and asserts that "weather is not gross negligence." Given this distinction, she counsels that the precedent is against the plaintiffs as "utilities historically have not been found liable for discontinuing service when the weather is to blame."

Payne also spoke about how claims would be received in court for Law.com, an industry-leading media platform "powering over 18 online U.S. national and regional award-winning legal publications." She explains that the Energy Reliability Council of Texas (ERCOT), the power grid operator which has been sued over its role during the storms, does not own the power plants which means "retail and generation of power is fully deregulated." She continues:

"'So, in terms of whether I choose to winterize, that is totally a choice that is for that specific power plant-whether they think it's going to actually be worth their capital for the conditions that they foresee,' Payne said."

In addition to appearing in these publications, Payne also was featured on the Lawyer to Lawyer podcast from Legal Talk Network. In her conversation with host J. Craig William, she refers to the Texas weather crisis as a "cascading series of failures" rooted in a lack of accessible natural gas reserves, increased demand for power to heat homes and diminishing natural gas production due to cold temperatures.

Going forward, similar scenarios are avoidable, Payne said, citing the possibility for Texas leadership to weatherize their power plants and different parts of the system as well as to connect with larger power transmission grids, like the Western and Eastern Interconnections.

To learn more about Payne and her research, click here.