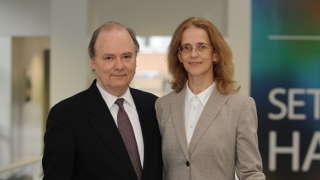 Seton Hall Law School's Last Resort Exoneration Project was featured on the front page of the Star Ledger and NJ.com for their appeal on behalf of two men wrongfully convicted for murder.

Lesley C. Risinger has been involved in winning the exoneration of two men in two different cases without the help of DNA evidence – one before she attended law school at Seton Hall.

She was recently appointed to the New Jersey Supreme Court Working Group on the issue of amending the Rules of Professional Responsibility to provide authorization to attorneys to disclose client statements that indicate guilt of a crime for which another was convicted.

D. Michael Risinger, the John J. Gibbons Professor of Law Emeritus at Seton Hall University School of  Law, served for 25 years as a member of the New Jersey Supreme Court Committee on Evidence; a life member of the American Law Institute, he is considered one of the foremost evidence scholars in the United States.

The Last Resort offers free investigative and legal services to the convicted innocent of New Jersey. Specializing in cases in which DNA evidence is not a factor, the project faces significant hurdles in seeking exoneration for those it believes are factually innocent. The Risingers, with the help of investigators, ballistic experts, forensic pathologists, students and former students, have been working on the case at hand for the better part of a decade.

Kevin Baker and Sean Washington were convicted for a 1995 double murder in Camden they have always maintained they did not commit. The Star Ledger notes, "In the years since their convictions, the legal group has compiled mounds of documents and witness testimony bolstering their alibis."

The only evidence Kevin Baker and Sean Washington killed two people in the courtyard of a Camden housing complex was the hazy, stilted testimony of a woman who was out that night in January 1995 looking to buy crack cocaine.

Prosecutors offered no motive for the killings. No gun was ever recovered. But a jury found the pair guilty after deliberating for three hours.

The two men and the efforts of the Last Resort Exoneration Project on their behalf were featured in a two-part series by the Advance Media Group (Star Ledger, NJ.com) in 2015.

The case was recently argued before three judges of the New Jersey Court of Appeals after an unsuccessful appeal before the same judge that had initially sentenced the two men. It is said that the case may lead to an official recognition of "a claim of actual innocence," currently not recognized by the State of New Jersey as a basis from which to appeal. Any such change in New Jersey law,  amidst current efforts to reform post-conviction relief for those who are believed to have been wrongfully convicted, could have major repercussions for the factually innocent imprisoned in New Jersey.

Their appeal also comes as authorities in New Jersey are rethinking how they handle wrongful conviction claims. Earlier this year, state Attorney General Gurbir Grewal announced a new conviction review unit in his office to vet evidence from prisoners who claim they're innocent, and state lawmakers have proposed an innocence commission to help free wrongly imprisoned people.

Yet the Baker and Washington case highlights the many hurdles faced by people who claim police and prosecutors got it all wrong.

Last year, the same judge who presided over their one-day trial in 1996 rejected a new appeal, disqualifying more than half a dozen witnesses and ruling new ballistics and forensic evidence didn't qualify as "newly discovered." Even as the attorney general was announcing his new effort to investigate questionable convictions in April, his office was joining prosecutors in Camden County to fight the pair's appeal.

On Monday, a three-judge panel heard arguments in the case, which raises legal questions that could reshape how the state's court system handles credible claims that its judges presided over trials sending innocent people to prison.

In detailed questioning over a three-and-a-half-hour hearing at the Hughes Justice Complex in Trenton, the justices acknowledged problems with the state's "star witness," Denise Rand.

"One could hardly imagine a less credible witness than Ms. Rand," said Judge Arnold Natali, noting the woman testified she had been out looking to purchase drugs, may have been high while witnessing the murder and gave conflicting accounts of what she saw.

"The jury had all that, all of this impeachable evidence, and still, apparently, believed her identification," Natali pressed Baker's attorney, Lesley Risinger. Why wouldn't a new jury convict them again?

"Today, the bullets and the shell casings and the bodies of the victims themselves tell us a very different story," Risinger, the head of the Seton Hall exoneration project, told the judge.

Rand testified at trial that she saw Baker and Washington run up to the two victims and shoot them in a courtyard before running off into the night. But ballistic testing commissioned by the legal group found both victims were murdered by a single shooter, and a forensic pathologist testified that one of them was on the ground when she was killed.

Prosecutors counter that their own ballistics expert couldn't determine whether one or two guns was used, and argue that Rand was a credible eyewitness because she had known both men for several years.

Assistant Camden County Prosecutor Natalie Schmid Drummond said that while "much has been made of Ms. Rand's testimony," she "was consistent throughout."

That comment prompted skepticism from another judge on the panel, Richard J. Geiger, who told the prosecutor, "I can't think of one detail that she testified about that hadn't changed over time. She flip-flopped back and forth on almost all the circumstantial facts."

"She was clear in her identification that it was these two defendants," Schmid Drummond replied.

There are many paths a prisoner can take to overturn their conviction, though the barriers remain high. A defendant could argue their defense attorney was ineffective, that their civil rights were violated or that newly discovered evidence would cast doubts in the minds of the jury if only they knew about it at trial.

Attorneys for Baker and Washington have argued all of these things, but they've also staked a bolder stance, known as a claim of actual innocence. The argument goes if you can demonstrate you didn't commit the crime, judges should cast aside procedural barriers or technicalities and vacate your conviction in the interest of justice.

Judges in New Jersey have never before recognized such a claim, though courts in states such as New York, Connecticut and Texas have legal standards for actual innocence. Lawyers for Baker and Washington have asked the appeals court to recognize it here.

Read the full Star Ledger story, "They were convicted of murder thanks to one shaky eyewitness. Will N.J. let them out 25 years later?"