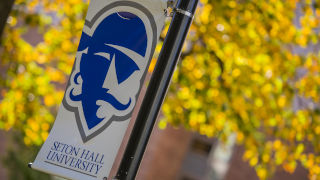 With an employment score of 92.55 percent, Seton Hall ranked first among all private colleges and universities in New Jersey.

Career resource aggregator Zippia ranked the colleges in New Jersey according to graduate job placement. Using data from IPEDS and the U.S. Department of Education's "College Scorecard," Zippia analyzed the nonprofit colleges and universities in the state "that offer at least a bachelor's degree," and looked "specifically at employment levels at year 10 after students have graduated."

"This ranking based on the U.S. Department of Education's data is further confirmation that Seton Hall's emphasis on hands-on experiential learning and internship opportunities pays real and lasting dividends for our graduates," said Vice President for Enrollment Management Alyssa McCloud. "A Seton Hall education is about outcomes – and helping students find their place in the world. And as the data shows, among private universities in New Jersey no one is better."

This most recent objective ranking based on government data comes on the heels of Seton Hall being named among the top 12 percent of colleges in America for the mid-career salary of its alumni, at $103,800.

This research and ranking was compiled by PayScale Inc., "the world's leading provider of on-demand compensation data and software." For the ranking, PayScale Inc. sampled data from more than 3.5 million full-time, degree-holding employees. The sample included 1,736 schools for people with only a bachelor's degree.

The PayScale College Salary Report, which is published each year, uses the standard measurement for mid-career salary, defined as 10-plus years after graduation.

This PayScale ranking is one of many this year that place Seton Hall among the best colleges in the nation. Seton Hall was again recognized as one of the "Top Colleges in America" by the Princeton Review; a "Best College for your Money" by Money magazine; a "College of Distinction" and a Forbes "Top College in America."

In the Forbes ranking for 2019, which looked at alumni salary and four additional criteria—student satisfaction, debt, on-time graduation rate and academic success—Seton Hall ranked higher than the New Jersey Institute of Technology.

"Seton Hall is rising," said McCloud. "And the numbers consistently verify that."

Founded in 1856, Seton Hall has broken its own record for applicants each year for five straight years and currently has its largest freshman class ever, with the highest average SAT and ACT scores in Seton Hall history.

While sustaining academic excellence in its incoming class, Seton Hall also has held its commitment to diversity in all forms and its identity as a university of opportunity: 25 percent of all incoming students are Pell eligible; 45 percent identify as students of color; and 36 percent of all students come from out of state. In addition, 25 percent are the first generation of their families to attend college.