Office of Mission and Ministry

Welcome to the Office of Mission and Ministry 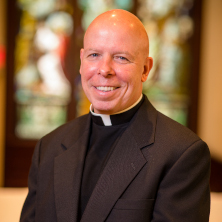 The name of the Office of Mission and Ministry echoes the language of the Bible. The word “mission” comes from the Latin word for “sending.”  In the Bible many persons are “sent” by God to accomplish particular tasks on His behalf, but Jesus especially is sent, as He said, “I came from God and am here; I did not come on my own, but he sent me” (John 8:42b). The word “ministry” derives from the Latin word for “service.” In the Bible also many persons serve at the behest of God, but especially Jesus who said about Himself, “The Son of Man came not to be served, but to serve” (Mark 10:45b).

Jesus shared His mission with His followers, when He said, “As the Father has sent me, so I send you” (John 20:21). A significant aspect of this mission is itself ministry or service to others on God’s behalf, as Jesus also said, “Let the greatest among you become as the youngest, and the leader as one who serves. For who is greater, one who sits at table, or one who serves? Is it not the one who sits at table? But I am among you as one who serves” (Luke 22:26-27). Therefore, Christians have always understood themselves as called and sent by God to serve others in every way, and especially by fostering their well-being and development.

For many centuries, the Church has expressed her fidelity to her God-given mission by establishing and operating educational institutions. Seton Hall University finds its origin and purpose here, as an institutional commitment of the Catholic Church in northern New Jersey.

As a university, Seton Hall exists to engage rigorously the search for truth, goodness, and beauty. As Catholic, Seton Hall conducts this search in continuity with the Catholic tradition, that is, in accord with its fundamental convictions and principles. These are not discerned by individual Catholics, but by the Church herself through its official teaching authority. As a Catholic university, then, Seton Hall fulfills its mission by fidelity to guidelines provided by the Church’s teaching authority, as these have been enunciated in various documents.

Belonging to the broad family of Catholic universities, Seton Hall is also a unique member of this family. Its distinctive identity stems from its history, its current place in time and space, its various constituencies, and so on. Thus, its mission is necessarily marked by distinctive elements.

This mission is a reality that is lived out daily. Yet it is has been articulated in various ways and in different documents, including the University’s By-Laws, its “Mission Statement,” and in the more elaborate reflection Seton Hall: A Catholic University. None of these statements excludes the others, but each must be read in light of the rest.

One purpose of the Office of Mission and Ministry is to supervise the ministry efforts of the University so that they continue to be done in accord with the University’s mission. A second purpose is to ensure and promote the mission of the University in all its many other efforts. To this end, the office provides needed assistance to the many divisions, departments, and programs of the University.