Have you ever heard of a college class where you get to pitch an original idea to a group of 90 students and faculty, and then translate your vision into reality with a team of ten highly motivated and competitively-selected undergrads that you get to hire?

Well that's exactly what students in the Buccino Leadership Institute's LEAD 2050 class are doing this semester.

"I don't know of any other leadership program in the country that provides this type of opportunity to students," said Dr. Bryan Price, the Institute's Executive Director. "This is taking leadership development to a whole different level."

Last year, the inaugural class of freshman students were split into seven teams comprised of 10-11 students to tackle one of three semester-long projects determined by Institute faculty. The intent was to give students practical experience working on an interdisciplinary team (IDT).

Each team had representatives from six of the participating schools and colleges at the university, making for seven eclectic groups that viewed the problem from different academic disciplines and worldviews. Price and six of the Institute's Associate Directors served as team mentors, but he says the teams were "100% student-led."

During their team's first session, which was recorded in the Market Research Center, the team picked a leader, selected their project, and settled on a team name. Students learned how to work on a team of different personalities, perspectives, and work styles. At the end of the semester, each team gave formal presentations on their semester-long projects to the entire class and various members of the university's leadership, including every Dean and the Provost.

Although end-of-semester surveys revealed how impactful these IDT projects were on their leadership development, students did not like the fact that they had no say on what team they worked on, and they wanted more than three options for the semester-long projects.

"I may be more excited about this leadership development idea than anything I've done in my career," said Price.

Leadership Idol Pitches
In what was called "Leadership Idol" in the Fall, every student had the opportunity to pitch an original idea on how to improve Seton Hall or the surrounding community. Twelve of the 82 sophomore students volunteered to pitch their ideas in front of the class during the last two weeks of the semester. The Institute ultimately voted as a collective to pursue seven of these ideas.

The winning ideas were as eclectic as the students proposing them. 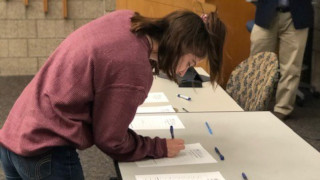 Throughout the Fall semester, students in LEAD 2000 learned critical concepts about leading others. They went on a 2-day trip to Gettysburg. They were exposed to guest speakers who discussed organizational culture, negotiation and conflict management, and diversity and talent management. After a class on personal branding, all students were tasked to produce a 2-minute video that showcased their unique talents and why others should hire them. Thanks to the Career Center, students uploaded their videos to a central database called Big Interview which allowed faculty to provide detailed feedback. All students also completed the DISC behavioral assessment and received training on how to interpret the instrument.

The "Draft" – Student CEOs Get Experience Hiring Their Teams
Over holiday break, the students who pitched the seven winning ideas were given various pieces of information in order to prepare for the first-ever IDT "draft" during the first week of school.

Now referred to as IDT "CEOs," these students were given access to all student personal branding videos, the DISC assessments of every student (with their previously obtained permission), and student voting preferences for all IDT pitches.

The student CEOs used this data to evaluate which students they wanted to "hire" on their teams.

Last Friday, the student CEOs put that data to use. Like in a fantasy football draft, they took turns with other CEOs in drafting their teams, picking from the remaining 70 students in the class. The only constraint was that each team had to be purely interdisciplinary, with established numbers of students from each of the six schools and colleges at SHU.

Because the CEO only had 90 seconds once they were "on the clock" in the draft, they had to prioritize all the students in the class beforehand. The seven CEOs spread out in the Nursing Amphitheater, so they had ample space for their various notes and charts. With a master list of students – those selected and those still available – displayed on the giant screen, the CEOs came down to the front desk one by one to make their selections. Ultimately there were 10 rounds of selections.

What Information Was Most Useful?
In a post-draft discussion with Institute faculty, it was fascinating to hear their individual approaches to selecting their team. It was evident every CEO had done their homework.

Some relied primarily on their first-hand observations of students over the 18 months they have been together. Several CEOs sited they had their eyes on particular classmates after they saw how they performed on other teams during last year's IDT projects.

For some CEOs, the 2-minute personal branding videos were the most important source of information. Several CEOs said they relied on the videos for special skillsets and talents that were previously unknown to them.

Others saw the personal branding videos as a litmus test of the student's drive and commitment.

According to Rachel Badway, "That 2-minute elevator pitch was really important in my decision-making – that's you selling yourself. If you can't ‘rock it' for a two-minute video, I don't know if you're going to be able to pull your weight or really commit to a team."

Several CEOs commented that new, unsuspecting students were suddenly put on their radar after making really impressive videos, while almost every CEO said they had removed candidates they would have otherwise picked based purely on poor videos.

Another useful source of information was the DISC behavioral assessment. Several CEOs said that they used access to these assessments in order to build diverse teams. In fact, Allison Lamoureux's first "draft" pick was chosen partially based on that student's DISC assessment. Knowing that more diverse teams are ultimately more effective, Lamoureux was looking for a student who had particular skills but who also had a behavioral style that was different from her own.

"I'm Developing into the Leader That I Want to Be"
Over the next three months, each IDT will meet during regular class time for five sessions. They will almost certainly have to meet outside of class in order to produce a first-rate presentation at the end of the semester.

While the student CEOs have lots of adrenaline pulsing through their veins, dreaming of how they are going to lead their teams to make their vision into reality, Price has a different focus.

"This might sound odd," Price said. "But I don't really care if any of their ideas succeed or fail. My focus is on providing an environment where each student can grow as a leader, whether they are the CEO or a student making invaluable contributions to their IDT."

If Annemarie Ryan's post-draft interview is any indication, Price's IDT idea is producing the desired results.

Ryan, a nursing major and one of this year's IDT CEOs, said "I've already seen so much growth in myself in this process. The fact that I'm even sitting in this seat right now, saying I'm a CEO of a project, is so far out of my bubble. It's unbelievable. And the fact that I just drafted an entire team is something that I couldn't have imagined doing in my college experience.

"I'm developing into the leader that I want to be."