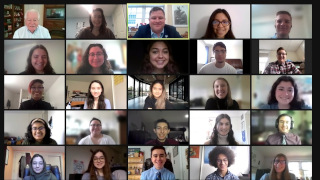 The Buccino Leadership Institute recently welcomed Roger Dow, CEO and President of the U.S. Travel Association as a guest speaker. Speaking to a collection of sophomores and juniors from the Institute, Dow discussed his leadership journey. He recounted his education and career experience and the way his leadership skills have influenced and impacted his life. A New Jersey native and Seton Hall graduate, Dow is known for his role in the travel industry and his long career with Marriott International.

With over 100 people attending the event, Dow detailed his rise at Marriott International, a chain well known for its hotels and resorts in 131 countries. During his undergraduate years at Seton Hall, Dow's mother introduced him to a summer lifeguard job at the sixth Marriott in Saddle Brook. He was eventually transferred to another Marriott in Houston, Texas, working in housekeeping and sales, before he was drafted for the Vietnam War. In 1983 Dow returned to Marriott and worked in corporate positions, eventually rising to become the Senior Vice President of Global and Field Sales. Dow left Marriott after 34 years and joined the U.S Travel Association in 2005. His most recent accomplishments include implementing a new marketing campaign, "Let's Go There", helping pass legislation that would directly benefit travel industry workers impacted by the Covid-19 pandemic, and uniting the travel industry as a whole.

When asked which leadership skills helped him achieve so much in his career, Dow states, "Great leaders are generalists." They understand that setting general goals and allowing people to achieve those goals according to their skill sets brings greater results. Leaders that engage in collaboration by delegating tasks to team members are often the most successful. Dow also exemplifies courageous communication, as he believes that being accountable and trustworthy is key to being a good leader. In addition, Dow spoke about the ten things that make a leader, which included taking risks, creating meaningful relationships, and being the answer. Being afraid to take risks will lead to missing out on great opportunities while being the answer to other's problems will set you up as an irreplaceable individual in your work.

The Buccino Leadership Institute is grateful to have heard from someone as esteemed and respected as Roger Dow and extends its thanks to Roger Dow and his team for taking the time to speak to our student leaders.