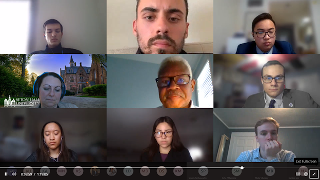 Seton Hall alum and Foreign service officer Russell Brooks spoke to the Buccino Institute's diplomacy cohort on leadership lessons he has learned throughout his career.

Russell Brooks began his professional career in the television business, allowing him to explore his two greatest passions in life: politics and sports. He stated that working for ABC Sports gave him the valuable experience of working with people of different cultures all over the world. His job also enabled him to travel to more states than the average American. This, he said, enabled him to learn about the diversity of the United States. After three decades in the media business, he decided to make a career change.

Brooks applied and was accepted to the Seton Hall School of Diplomacy masters program. Courtney Smith, one of Brook's first-year professors, recommended Brooks take the foreign service test. Upon graduation, he took the test and passed.

"Dr. Smith and my other professor gave me the knowledge I applied and the encouragement to pursue a career at the State Department. I encourage others pursuing such careers: we need very good, creative, confident people, with technological skills second nature to young people, representing our country, showing the diversity we have and that we care about issues that affect the entire world."

After deciding to pursue a career in the foreign service, Brooks worked across the globe in places such as Washington, Africa, Nigeria, Honduras, and Peru. He observed that "many people believe that people think that people in the United States are not as diverse as we are." In the eyes of many, he clarified, a "real American" is Caucasian. Brooks explained that part of his job is to not only explain and represent what America is like but offer a different viewpoint without contradicting people.

Brooks decided to be a Public Diplomacy Officer in the Foreign Service. This, he said, fits well with his television background because of his experience working in corporate culture and engaging with many audiences.

Working overseas and representing the United States taught Brooks about the importance of integrity in leadership. He said that a State Department officer has the responsibility to "maintain composure, absorb information, communicate, and to project integrity" - not only to your team you lead but the people you deal with.

"People see American through you each and every day...Sometimes you will encounter people above you who do not exemplify the things I just described. Integrity is extremely important."

Something that Brooks noted from over a decade in the State Department is how it has impacted his perception of the United States.

"We are not a perfect country and we do not have a perfect foreign policy, but I know that we are also doing some good things. Nothing in the State Department has convinced me otherwise, and people are benefiting as a result."