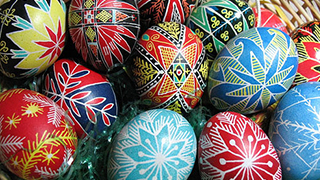 On Thursday, March 19 at 6:30 p.m. in the Beck Rooms of the Walsh Library, the Slavic Club will be holding its Annual Easter Eggs Decorating Workshop to teach its members and guests the ancient Slavic art of decorating eggs. They are called pysanky in Ukrainian and pisanki in Polish, originating from the word "to write." They are decorated with melted bee's wax using an instrument called kistka.

In Slavic cultures, the egg has represented the original source of creation. Pre-Christian Slavs used decorated eggs to welcome the sun during the spring. The symbolism of pysanka is a blend of ancient rituals and Christian traditions.

Spring is a time for release from confines of winter and Easter celebrates the Resurrection of Christ and the spiritual rebirth of man. With the acceptance of Christianity in 988 A.D., the pysanka became part of tradition and ritual of Easter in Russia, Ukraine, and later in other Slavic countries. The pysanka took on the symbolism of rebirth. The egg symbol was likened to the tomb from which Christ has risen, and decorated eggs became treasured as religious mementos.

This workshop will be conducted by Nick and Natalia Hlushko.

Participants need to pre-pay $5 (cash) per person to Professor Anna Kuchta (contact at anna.kuchta@shu.edu) for all the necessary materials needed for decorating their eggs, on or before Thursday, March 12.

Everyone is welcome! Slavic food will be served!