Diversity and Inclusion Speaker: “No One is Immune to Implicit Bias” 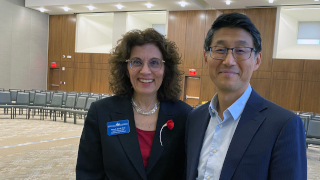 On January 31, Seton Hall hosted Jerry Kang, UCLA's Vice Chancellor for Equity, Diversity and Inclusion, as the first speaker of the Inclusion Speaker Series of the Spring 2020 semester. A renowned speaker and educator, Kang presented "Taking Implicit Bias Seriously" to a packed room in Bethany Hall.

Kang's MindManager presentation, a format that relies on data visualization to provide information, showed the audience the "science behind bias" with clear charts and interactive exercises. Tests, he explained prove that some people have a hidden preference for one race over another, even when they are not conscious of such a feeling.

He led the audience in a group exercise called the Stroop task, a phenomenon that demonstrates the difficulty in naming the ink color of a colored word if there is a mismatch between ink color and word. The hesitation our brain has when naming a color when the written word is a different color, Kang explained, shows that our brains are wired to see things a certain way.

Kang went on to humorously present how people typically categorize people while trying to describe the meanings associated with certain attitudes, traits, and stereotypes. He then went on to describe implicit bias, which is "an attitude or stereotype in your head that is not directly, introspectively accessible to you." Kang explained the concept further: "We lose emails in Outlook all the time; is it possible you lost a mental association in the wetware that is your brain?" Implicit preferences can predict behavior and can be related to discrimination in hiring and promotion, and other decision-making moments. Per Kang, "No one is immune to it." 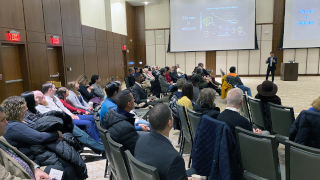 During his presentation, Kang asked, "Do we have junk in our heads that alter our interactions?"

So how do you measure implicit bias if it not accessible? Kang indicates we would need to measure it indirectly. To support this, Kang shared examples of test results of people who were administered the IAT, Implicit Association Task, between 2002 and 2015. The IAT measures the strength of associations between two concepts (e.g., black people and white people) and evaluations (e.g., good and bad). This test extends to other categories as well, such as age groups (young vs. old), sexuality, other races and nationalities, and religion, with all of them showing similar results, further proving Kang's point that "no one is immune." For more information, visit the Project Implicit website.

"Good intentions are not all that matter, and are not good enough," Kang stated. And while it is tough to recognize these hidden, internal feelings, Kang explained that there are things we can do to prevent our implicit bias from affecting our decision making. Kang stressed that people should focus on strategies that deny implicit biases the chance to operate by following these guidelines:

In his conclusion, Kang explained why he feels recognizing implicit bias is so important. "It's the one thing we can't blame on others or the past. It's in our own house, it's in our own mind. We have to own it," meaning that we all need to recognize that we are capable of it and are not immune to it.

On race, he has focused on the nexus between implicit bias and the law, with the goal of advancing a "behavioral realism" that imports new scientific findings from the mind sciences into legal discourse and policymaking. He is also an expert on Asian-American communities, and has written about hate crimes, affirmative action, the Japanese American internment, and its lessons for the "War on Terror." He is a co-author of Race, Rights, and Reparation: The Law and the Japanese American Internment (2d ed. Wolters Kluwer 2013).

The University has now had seven speakers in the Inclusion Speakers Series – a series of dialogues which include an examination of the factors that promote inclusion and influence student success. On March 19, Candi Castleberry Singleton, Vice President of Diversity Partnership Strategy and Engagement at Twitter, will present the final inclusion dialogue of the 2019-20 academic year.