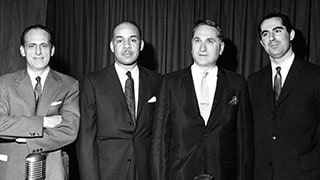 William J. Connell, Professor of History and Joseph M. and Geraldine C. La Motta Chair in Italian Studies and co-editor of the landmark volume The Routledge History of Italian Americans has organized a conference at the new Philip Roth Personal Library at the Newark Public Library, Conflicts Depicting Race and Ethnicity in Fiction, 1962 and 2021: Philip Roth, Ralph Ellison, and Pietro di Donato, on Tuesday, November 16, from 4 p.m. to 8 p.m.

Offered in person and live-streamed on Zoom and Facebook Live, this event offers a rare opportunity to explore thoughts on the responsibilities of minority writers of fiction in the early 1960s that still confront writers today. The conference addresses the question whether writers of fiction who identify with a race or ethnicity have a special role to play, or particular obligations, when they portray characters who share the same identity. Should they seek to advance certain goals? Should they refrain from unkind criticism? Should they avoid or curtail representations of behavior that approximate contemporary or historical stereotypes?

Connell discovered that in 1962 Philip Roth, Ralph Ellison and Pietro di Donato were invited to speak on this question at a symposium held at Yeshiva University. The event remains legendary, largely because throughout his career Philip Roth stated that the fierce interrogation of his work at Yeshiva was what made his bones as an author, confirming him in his attitudes toward religion and ethnicity. Recent recovery from the Yeshiva archives of the tape of the 1962 event allows participants to experience the first public airing since the original event of these three authors speaking eloquently about themselves and what should be the role of both the writer and the reader when confronting them in a work of fiction and segments will be played at this conference.

Hear the young Roth's justification of himself under fire and an eloquent Ralph Ellison–then at the top of his game–describe his writing in relation to the civil rights movement. Listen as Pietro di Donato, a once famous mid-20th century writer, excoriates second generation Italian Americans for their materialism, while speaking fondly of communism (in Cold War America…). The transcript of the discussion at Yeshiva has never been published, and thanks to the estates of the three authors, and Yeshiva University's Special Collections, which have granted their permission, the Roth Personal Library will be airing the tape publicly for the first time.

The Newark Public Library offers this conference in full awareness that the issues that were discussed with memorable eloquence in 1962 remain with us in 2021. As part of the program a distinguished set of scholars and critics will discuss the Yeshiva symposium and explore how ideas of race and ethnicity current in 2021 compared with the views expressed in 1962.

Connell will moderate the discussion of a group of today's distinguished scholars speaking about each of the three writers, including on Roth with Joyce Carol Oates (who will be sharing remarks from noted critic Elaine Showalter) and Steven Zipperstein (Stanford University, now writing a Roth biography); on Ellison, John Callahan (Ellison's literary executor) and Sterling Bland (Rutgers University-Newark); and on Di Donato, Mary Jo Bona (Stony Brook) and Fred Gardaphé (Queens College, CUNY). Simone A. James Alexander from Seton Hall will be moderating the Q &A session.

"The conference I've organized for the Newark Public Library on November 16, 2021 came about in an unusual way. I was working on the study of an Italian immigrant to Newark who faced difficulties not unlike the main characters in Pietro di Donato's Christ in Concrete (1939) and Philip Roth's last novel, Nemesis (2010)," said Connell. "At a certain point I discovered that both authors were on the same stage, along with Ralph Ellison, at a famous symposium organized by Yeshiva University in 1962 on the responsibilities of minority writers of fiction when it comes to portraying members of their own minority groups."

Curious to find out what had been said, he contacted Yeshiva's Special Collections where, to the librarian's disappointment, the surviving audio had been embargoed. Permission of all three authors' literary estates would be required for its release.

"That gave me pause, but then I realized I might be in a unique position for achieving that, since I had earlier hosted a secret emissary from the Nobel Prize Committee charged with investigating Philip Roth’s writings about Newark," he shared.

"I also enlisted the help of the new Philip Roth Personal Library which was opening in 2021 (it is housed in the Newark Public Library), and soon the conference was off and running. These are three great authors, and the tape of their eloquent remarks that we'll be playing sheds light on their personalities, their writing, and the state of American literary culture in the early 1960s, while inviting us to reconsider issues still confronting writers in 2021," said Connell.

In addition to the landmark event, Connell explained that he is working with a documentary filmmaker and a book length manuscript is being planned.

Connell, founding director of the Charles and Joan Alberto Italian Studies Institute, has received numerous recognitions including a 2019 Andrew Carnegie Fellowship, fellowships at Harvard's Villa I Tatti and the Institute for Advanced Study in Princeton, the Mille Grazie Award of UNICO National, and the Presidential Award of the Columbian Foundation. Twice he served as a gubernatorial appointee on the New Jersey Italian Heritage Commission. In 2016 he received the Monsignor Joseph Granato Italian Culture Medal of Seton Hall University.

The conference is sponsored by Seton Hall and the Philip Roth Personal Library of the Newark Public Library, the Philip Roth Endowment of NPL as part of the series Keeping It Real: Conversations about Race, Gender and Class, Seton Hall University Italian Studies Program; with Carnegie Corporation of New York, Verizon, Community Foundation of New Jersey and donations from Seton Hall's Diversity, Equity and Inclusion Committee and the Friends of the Jewish Historical Society. The event is free, but reservations are required. Please visit here.