The North lab space has 8 Vicon Bonita optical cameras arranged to have the ability to collect 3D motion trials for baseball pitching and treadmill running among other things. Having 5 of the cameras mounted on tripods adds to flexibility of type of trials we can capture. In addition to the optical cameras a Vicon Vue digital video camera is also integrated. The Bertec instrumented treadmill and 16 sensors of Delsys Trigno EMG are able to be integrated with the motion capture system in the North lab.

The South lab space has 8 Vicon optical cameras (4 Vicon Bonita and 4 Vicon Vero). Six of the cameras are mounted to the wall and ceiling, 2 on tripods, which allows for a large open capture space. Bertec forceplates and 8 sensors of Delsys Trigno EMG are able to be integrated with the motion capture system in the South lab.

Data acquisition and analysis is performed using Vicon Nexus software. In addition to analyzing data in Nexus, data is able to be exported via c3d file format for analysis in Visual3D, another software asset of the lab. 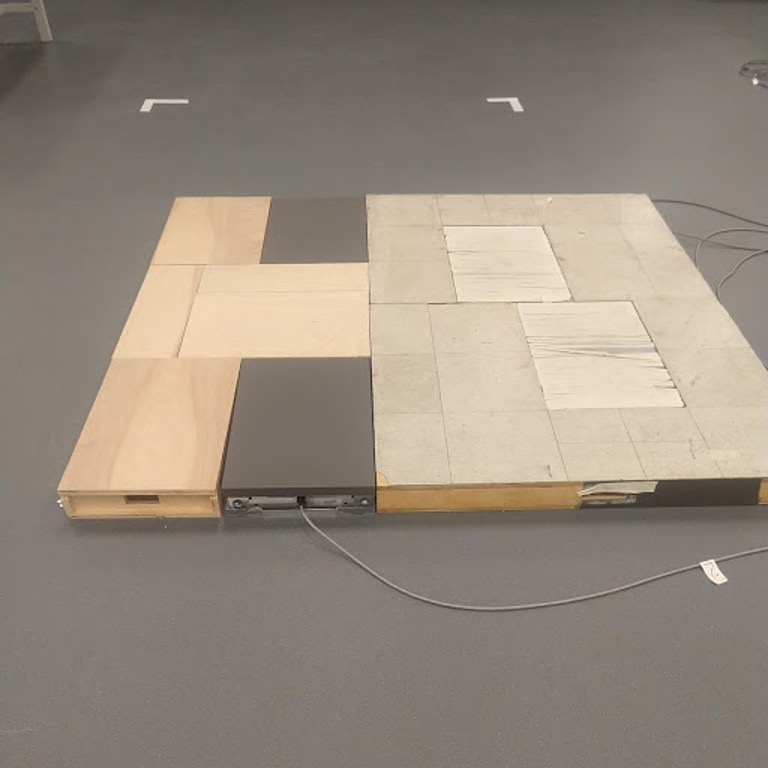 Bertec Force Plates (4)
Bertec's product line of force plates have been specifically designed for gait, balance, sports and other static and dynamic analyses. Through the use of strain gauge technology, innovative design, and quality manufacturing, Bertec's force plates are well suited for both static and dynamic applications. Each force plate consists of a number of strain gauged load transducers and a built-in digital pre-amplifier for signal conditioning. Each of the four 60cm x 40cm plates can be moved to fit any configuration needed by the research team. All force data is integrated with the Vicon motion capture system and utilizes Nexus software for acquisition and analysis. 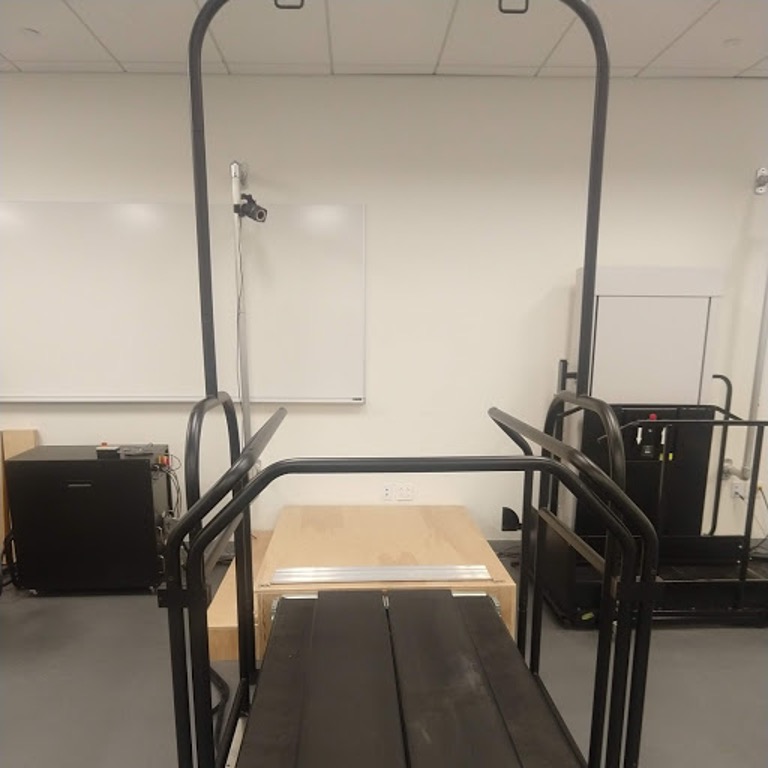 Bertec Instrumented Treadmill
The Bertec Instrumented Treadmill allows researchers to reduce gait laboratory space requirements and remove the limitations inherent in a traditional gait walkway. The split belt design features 2 force plates (each 160cm x 48cm) consisting of a number of strain gauged load transducers and a built-in digital pre-amplifier for signal conditioning. The split belt treadmill has the ability to control each tread belt independently or synced. Additionally, the treadmill features the ability to suspend subjects that don’t have the ability to fully weight bear or require assistance during gait. 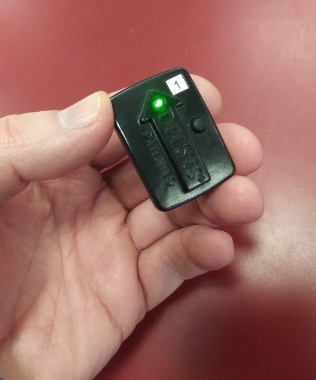 The Trigno Wireless EMG System is a high-performing device designed to make EMG signal detection reliable and easy. Each EMG sensor (3.5cm x 2.5cm) has a built-in triaxial accelerometer, a transmission range of 20m and a rechargeable battery lasting a minimum of seven hours. The system is capable of streaming data to EMGworks Acquisition and Analysis software and generating 16 EMG and 48 accelerometer analog channels for integration with motion capture and other third-party data acquisition systems (ie: Vicon Nexus). Full triggering features further expand the possibility for integration with additional measurement technologies. 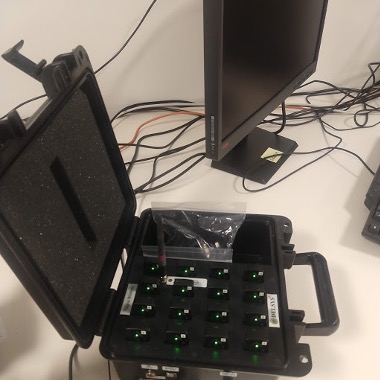 Our North Lab space features 16 EMG sensors that can be used independently with Delsys EMGworks software or can be used when integrated with the Vicon motion capture system and collected in Nexus.

Our South Lab space features 8 EMG sensors that can be used independently with Delsys EMGworks software or can be used when integrated with the Vicon motion capture system and collected in Nexus. 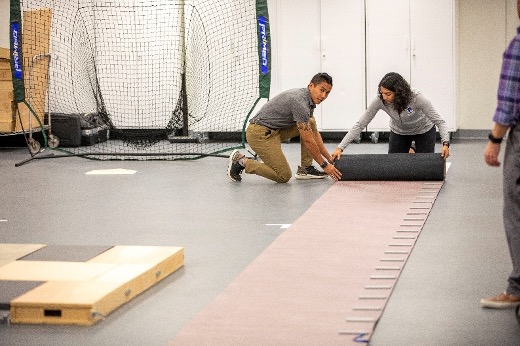 GAITRite (4)
The GAITRite System is a portable electronic walkway utilized to measure the temporal (timing) and spatial (two-dimension geometric position) parameters of its pressure activated sensors. The GAITRite system's intent is to be utilized as a measuring device for the events occurring during biped and quadruped locomotion. Inferred parameters are easily obtained by applying common physics and math formulas to the directly measured temporal and spatial data, i.e. calculate velocity, relationships between spatial and temporal events, etc. Each gait mat is 24ft long x 35in wide. Data acquisition is simple using the GAITRite software on a laptop. The portability of this device makes it easy to get to a research sample population.

Balance Master (NeuroCom)
NeuroCom's® Balance Master products provide objective assessment and retraining of the sensory and voluntary motor control of balance. With visual biofeedback on either a stable or unstable support surface and in a stable or dynamic visual environment, the clinician can assess patients performing tasks ranging from essential daily living activities through high-level athletic skills. The objective data aids in the design of effective treatment and/or training programs focused on the specific sensory and motor components underlying a patient's functional limitations. The lab features 2 NeuroCom SMART Balance Masters for assessing or training in a dynamic environment. These systems feature a 38cm x 52cm movable platform as well as a 3 sided movable wall structure to create dynamic environments. The lab also features 2 NeuroCom Balance masters which feature a static 46cm x 154cm platform to assess various balance functions. These systems integrate with a CPU that runs NeuroCom’s proprietary software for acquisition and analysis. The VSR Sport is a portable 46cm x 77cm platform that runs off of a laptop computer. 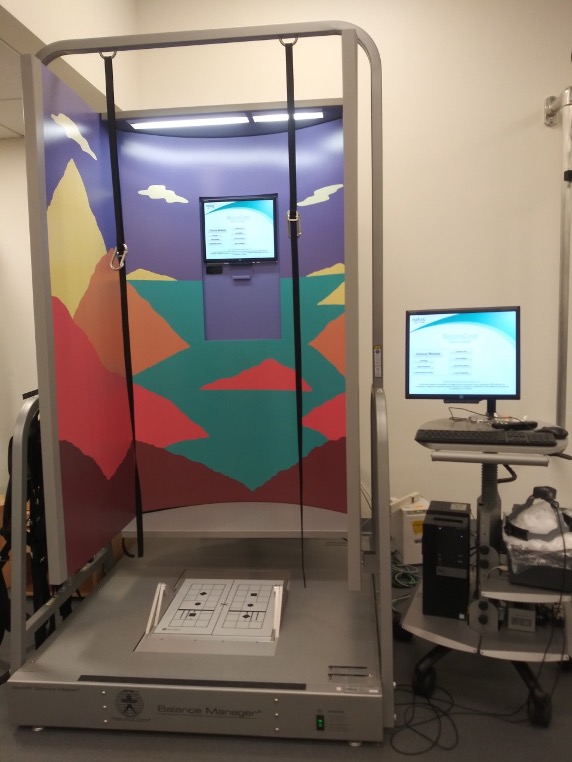 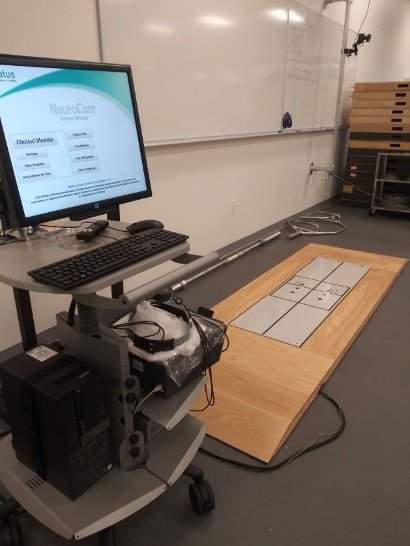 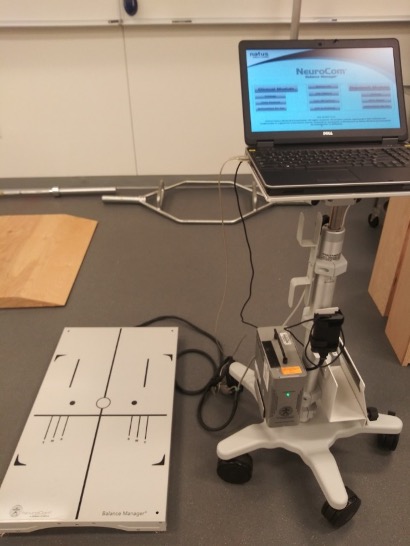 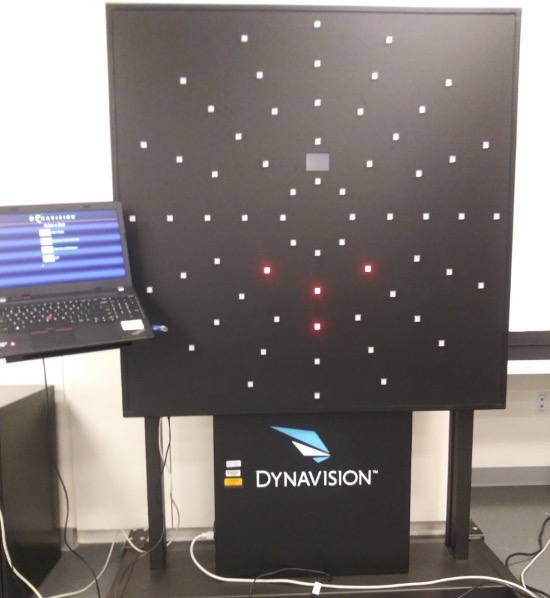 Dynavision D2
The Dynavision D2 visuomotor training and assessment device features 64 LED light switches for a subject to interact with. The device features several modes and programs as well as the ability to create custom programs to test and train the reaction time of a subject. Data is acquired via Dynavision's proprietary software via laptop computer.