Upset Win Places Pirates in Top Ten in the Country

“This upset win was something no one had done up until this point and sent the message that the Seton Hall team lives its school’s motto of Hazard Zet Forward,” said Seton Hall esports manager, Victor Gomez '17.

The crowd, sportscasters and analysts predicted an overwhelming victory for Northwood, then undefeated No. 2 in the East with a 5-0 record. However, the Pirates, coming in at seventh in the East with a 1-2 record, ultimately defeated Northwood. Boosting the Pirates’ ranking regionally and nationally, this win brought the team’s record to 2-2. Seton Hall's current record is 6-3, and the team is undefeated in the Big East (4-0).

This win came after a string of other success since the team began preparing in offseason. Led by the now seasoned captain, Antonio “Tone” Riozzi, the team set their sights on a national tournament after welcoming two incoming freshmen in the offseason, Paulie “Stokelyy” Santoro and Kevin “Froze” Minch.

With new talent on the team, the road to national recognition began at the College Carball Association’s summer series, where teams played in two separate qualifying rounds followed by round play to determine seeding for the summer league. Seton Hall’s freshly formed squad qualified and secured a spot as a division one squad, one of the top 12 in the Eastern United States. The team finished their summer run ranked fifth in the east and prepared to take on the Big East in the Electronic Gaming Federation and the Big East Esports Rocket League Season 3.

In the first week of competition, the team scored 18 goals and allowed none in their first series. The Pirates capitalized on their momentum as they went on to qualify for the national CRL tournament. The highly selective competition only accepted 24 entries from over 1,242 participating teams. As the team climbed through the qualifying round, it faced The University of Akron, whose team finished second in the national tournament last fall. After a close best of five series against The University of Akron team, Seton Hall locked in its place to the qualifying match versus Valley Field, going on to win in game five. 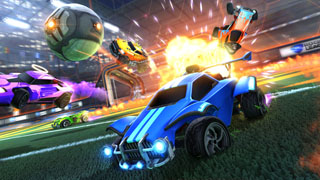 These two wins signaled a first for the team in CRL, placing them among the top 12 in the East. Since the inception of CRL in 2017, only four New Jersey teams have ever qualified: Rowan University, Stockton University, Rutgers University, and now Seton Hall, the only Big East member to ever qualify for the national tournament. Playing on the national stage means streams are hosted on twitch.tv/RocketLeague, the official twitch stream for Rocket League, hosted by the game’s developer, Psyonix.

Seton Hall has been on this stream twice and both have been wins in front of an average of 30,000 global viewers, including for the upset win over Northwood Blue.

The Pirates have two matches left in the CRL national tournament and an opportunity to cement its position as a top four school in the East and move on to playoffs. The remaining competitors are Brock University (2-6) and Stockton University (4-3). Seton Hall plays Stockton University tonight, Wednesday, November 3 at 9:40pm EST. The game will air on the official Twitch stream.

“I am proud of the dedication and results this Rocket League team has continued to show. This team is carving the path for Seton Hall and the Big East and adding to the path built by phenomenal contemporaries in the state of New Jersey,” said Gomez. “It is an honor to be able to manage a program with such talented players and ones who are willing to put in the hours to play their absolute best. I look forward to the heights these players will reach, I know this is just the beginning.”

About College Carball Association
College Carball Association, also known as CCA, is a community, founded in February 2017, where university students and alumni can come together to establish their university clubs and teams, hang out and practice with other collegiate players, and engage in intercollegiate exhibitions. The CCA serves as a major communication HUB for College Rocket League Club Leaders. The CCA currently has 270+ registered school chapters, 200+ chapters in development, and over 6,500 members! For over 4 years the CCA has been broadcasting and organizing Rocket League events such as Collegiate Rocket League, Intel Inspires, and CCA Summer Series.

About Psyonix
Based in San Diego, California, Psyonix is a critically acclaimed video game developer behind some of the most entertaining video games in the industry, including the hit sports-action hybrid Rocket League. Psyonix joined the Epic Games family in June 2019.