The Seton Hall Gaming Sector esports club was created in 2013. Fifteen students currently participate as team members, representing Seton Hall in league and tournament play. Seton Hall's esports club is among the first University gaming organizations in the state of New Jersey to be recognized.

In November 2019, the University completed construction on a state-of-the-art computer lab and esports facility with dedicated and optimized computers for students’ recreational and competitive use. Seton Hall’s esports and gaming lounge is located in Jubilee Hall on the fifth floor. The center contains 33 desktop computers, 16 of which are game-ready and dedicated to gaming with Overwatch, Rocket League and League of Legends already installed, with gaming chairs, mice, keyboards and headsets and six monitors with the capability to project what’s displayed on any of the 16 gaming desktops throughout the room. 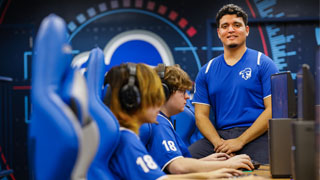 A Legion of Pirates

Despite the difficulties brought on by the pandemic, the Seton Hall University esports team continues its winning ways.