A Candid Conversation About Crime, Racism, and Policing in America Seton Hall welcomed alumnus Matthew W. Horace, M.A. '13, back to campus on March 10 for an event sponsored by the College of Education and Human Services.

Horace, who has worked in law enforcement for almost 30 years, began his career as a police officer on the beat in Arlington, Virginia, and rose through the ranks, working in local and state law enforcement before moving on to become a federal agent covering high profile investigations with the Department of Justice.

A security and law enforcement analyst for major media outlets such as CNN and the Wall Street Journal, Horace has written two books, including his most recent, The Black and the Blue. The book gives an insider's account of how racism and systemic problems challenge America's police departments. It describes how good officers, who pledge to protect and serve, are often hampered by implicit bias and institutional weaknesses.

In her opening remarks, Dean Maureen Gillette said The Black and the Blue had become a catalyst for deep conversations about the complex issues of police and race possible. "As leaders and as people who care deeply about others, we should be able to talk to each other, listen to each other, and work together to make our communities places where our young people can thrive."

Horace was introduced by fellow College of Education and Human Services alumnus, Songa Thomas-Montford, M.A. '08, '10, who described him as a role model for others. She cited the scholarship Horace set up at his alma mater, Delaware State University, honoring three DSU students who were murdered in Newark in 2017. Thomas-Montford also noted Horace's work at Fairleigh Dickinson University, where he teaches criminal justice, leadership and crisis communication. "Matt has elevated himself and has served as a mentor to help us reach our full potential," she said.

Before Horace's address got underway, the audience watched a news interview, featuring Horace and a police officer talking about "blue racism" and the implicit bias that can exist within police systems and toward police officers. During the segment, Horace, an African America, asked the veteran officer, who was white, if he'd encountered any racial remarks in his years in the police department. The man repeatedly said he did not. Horace then told the audience that the officer's view reflected the difficulty within the ranks to speak openly about racism in the police department. 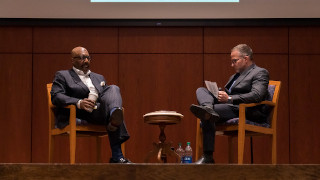 Horace and Professor Thomas Shea spoke about the challenges America's law enforcement members can face in carryng out their pladge to serve and protect.

In his research for his latest book, Horace, who currently works as Chief Security Officer for the Mayo Clinic, documented the experiences of those working in law enforcement by talking to officers from different backgrounds. He also shared stories that reflect what Horace said were his own biases as a police officer.

He wrote about people in the communities he served and reported on what is going on inside law enforcement systems around the country. Horace portrays departments that are struggling to do better, and others that are broken, corrupt, and in some cases, conspiring with other government agencies against their most disadvantaged citizens. He describes the situation in Ferguson, Missouri, where African Americans have become a majority in the town only in the last few years. In Ferguson and towns around it, he writes, there is a "dirty secret":

City officials used their police and court systems as a means of taxing residents to subsidize their governments. Local police pestered residents by aggressively handing out traffic tickets or housing code violations to take in millions of extra dollars. If residents didn't have the money to pay the fines, off to jail they went, until a friend or a family member could scrape together the money to bail them out and pay the charges and additional fines. Traffic tickets turned into arrest warrants, and people were carted off to jail. Some people lost jobs and careers were dashed as local municipalities used their jails as debtors' prisons.

Growing Up Black With Blue

Horace says he was shaped by his own early encounters with law enforcement in Philadelphia. His parents told him to stay away from police. And, if an encounter occurred, to submit to them "in order to come home alive." At one point, he was the victim of a crime and was mistakenly viewed as the perpetrator by the police on the scene. Those experiences informed Horace's early police work, he said, and taught him that it was important to talk about what was happening — that racism was an issue in the department, that it was "alive and well in the ranks."

Horace mentioned the "dichotomy" of being a black police officer and being viewed with suspicion by the community he serves. He reflected on the personal biases all officers face, writing:

Along with our orders, we also take with us our personal biases, prejudices, and community norms, all of which inform our actions. Consequently, as we carry out our mission, some neighborhoods and people take precedence over others. Some people are seen almost immediately as suspects, instead of as law abiding citizens.

After Horace's remarks, Dr. Thomas Shea, a faculty member with the Police Graduate Studies Program continued the program with some questions about Horace's experiences, followed by a Q&A with the audience.

A law enforcement veteran in the audience asked Horace if there were any hopeful signs in terms of a change in attitudes among rank and file officers. Admitting the problems persist even under the leadership of black law enforcement officers, Horace said he believes mismanagement, poor leadership and corruption challenge the system. Horace pointed out that social inequities also stifle progress noting that "the lives of many people have not improved enough." He added that the "culture in law enforcement leads to conduct issues that impact communities."

Asked what someone who is not a person of color could do knowing about this problem, Horace recommended listening and showing compassion. "Listen to other points of view," he said, adding that people should avoid questioning the truth behind something you hear simply because you don't quite understand it.

Many police departments are doing things right, Horace said, however, media attention is often focused on things that are going wrong. Still, he noted, "it's better to be part of the solution than part of the problem." To have an impact, Horace urged, people must do the right thing, get involved and vote.

"Try to change hearts and minds," he told his audience. 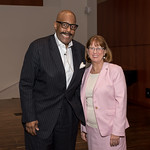 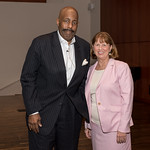 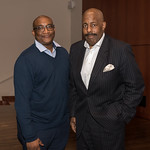 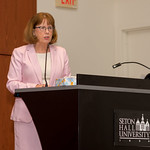 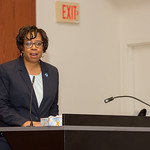 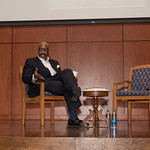 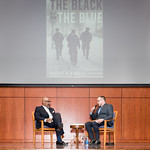 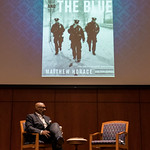 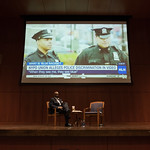 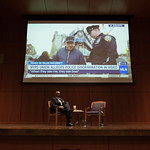 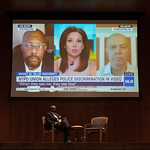 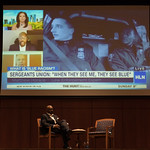