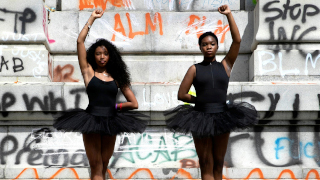 A joint effort between students at Seton Hall, Rutgers and Newark's East Side High School, has given rise to an inspiring special edition of The Rutgers Humanist, a journal published by Rutgers University's Center for the Study of Genocide and Human Rights. The special issue is part of the Perils and Promises of Diversity Initiative in Education, a collaboration between the two universities and several local and international schools.

"The need to act in difficult times is strong, and writing is one response that can impact both the writer and readers," explains James Daly, Ed.D., a professor in the Department of Educational Studies at the College of Education and Human Studies. Daly worked on the project with Nela Navarro, a writing professor at Rutgers and the Center's Associate Director.

In their essays, contributors share how changes in their personal lives, in their education and in the world around them have influenced how they live and work today.

Professor Daly, who is also a Co-Founder of the Center for Global Education at Seton Hall, believes that the issue presents a call "for justice, a demand for equity, and a determination to overcome inequality."

In her narrative, entitled "The Disruption of Stereotypes," Markia writes about her experience as a first gen African American woman.

"It's sad to think that in the next few years blackness will continue have more pre-determined stereotypes attached to it. Trust me, these stereotypes are not easy to live with. They follow you like a shadow, you wear them like a shirt, and they are attached to you forever like a tattoo. I don't think we as black people walk around bowed head and frowned faced because we know these stereotypes exist. In fact, we do just the opposite; live our normal lives. Our skin color says enough."

In "The Purpose in Struggle," junior Zoe Susser pays homage to her grandparents, Holocaust survivors from Poland. She writes:

"I have taken it upon myself to tell their story because Holocaust survivors are becoming few and far between. Their story should not die with them. It is vital to keep their stories alive, so we don't forget our history."

A Secondary Education major and Music minor, Zoe found inspiration in her grandparents' story of hope and perseverance. She examines the path of their experience during World War II to help fortify herself against the fear, loneliness and anxiety that she, like so many others, grappled with during the pandemic.

"If we fast-forward 80 years, rumors were circulating about a new virus taking thousands of lives with the expectation that the United States would suffer an extreme number of casualties. Just like my grandfather, we were wondering how long is this going to last? What will happen after this? What will happen to me? We were bombarded with strikingly similar feelings to the ones my grandparents were feeling at the onset of the war. We were struck with feelings of despair, loneliness, and anxiety. We have been confronted by death."

Educators as Artists and Disruptors
One of the central of themes of the Humanist essays is change, particularly in terms of what goes on inside the classroom. In her piece, "Disrupting the Status Quo," Claudia Valverde, '20, offers the perspective of a new teacher starting her career in the midst of the pandemic. "I found myself in the interesting position of being both a student and an educator during this chaotic and uncertain time, and while it was not easy, I came out of it feeling like I had better understanding of what it really means to be a teacher."

Now a teaching biology at North Brunswick Township High School, Claudia says that the idea for her article came from her realization that the pandemic had challenged the hierarchy in schools. The idea of equating "years of experience" with excellence no longer applies, she argues. "What I lacked in experience I made up for in my understanding of educational technology, not only because it was a part of my college curriculum but also because technology has always been a part of my life."

Another recent graduate who has gone on to become a high school teacher, James Lopez, '20, looks back on his own academic shortcoming in middle school and high school. In his piece, Lopez finds himself with a new realization. He writes: "there was nothing ‘wrong' with me as a student, rather, the pedagogies and practices of my K-12 teachers only aligned with the strengths and skill sets of certain students. To put it plainly, their pedagogies were not poppin' enough to reach all the different types of learners in their class."

Lopez goes on to pose the questions he feels educators should ask themselves in order to be more successful in their work with students and provides tips for what he calls "Poppin' Pedagogy."

"We are masters of our content and we have the ability to make it come to life every time we step in front of the classroom. If Michelangelo stopped improving his art after he mastered painting on canvases, we would never have the Sistine Chapel."

Writers in the Humanist return to the subject of disruption throughout the issue. Some go further in examining the ways in which the pandemic has impacted their approach to teaching. They highly value the importance of creating a relatable classroom environment where teachers can connect with their students.

Marya Mahmood, valedictorian for the College of Education in 2020, writes that teachers need to recognize the humanity in every student.

"They come first. Their mental health, their physical health, nothing else matters. At the end of the day, we choose to be teachers for students, not for content. Especially now more than ever, teachers are realizing the importance of checking in on their students. This should not be new. Teachers, too, are important. Take care of yourselves."

Marya calls on teachers to acknowledge structural injustices and racism and encourage students to use their own voices to stand up for change.

"Teaching is disruptive, and teaching is impactful. Your voice as a teacher inspires the hundreds of students you have. You have so much power. Just because you may not be seeing your students in person, does not mean that your impact is gone. Teach your students to use their voices and make change. Teach them everything you were never taught."

Working to Become Anti-Racist
Seton Hall senior Cecilia Pateman adds to this discussion in her own article in which she calls for "crucial and raw conversations" around race at Seton Hall and beyond. As a student, Cecilia has been active in advancing the dialogue around diversity, inclusivity and anti-racism at the University and in the high school she attended. Her work for justice and thoughts about America's racial reckoning are a reminder that change is coming and hard, important work lies ahead.

"I look at this year and imagine it like a movie as it seems as though the world around us is crashing and burning. There is a global pandemic circling the world, people are disagreeing about science, the statement Black Lives Matter is controversial, there are modern day lynching's, the list goes on. Even though the world seems to be ending, I believe it is beginning. This renewal is an opportunity for non-Black folk to become BLM Allies. Whether you are brand new to the conversation and the movement, or you have been fighting for years, we all have more learning and listening to do. The death of George Floyd has set the world on fire. People are marching in the streets, painting BLM on roads, altering football team names, and changing the world as we know it. This change is long overdue, but it is happening, and people are evolving."

To explore these essays and others further, please download the current issue of the Rutgers Humanist.