A Conversation with Education Leadership Alumni 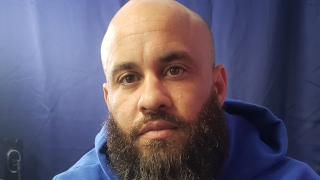 Sam McGhee uses the skills he gained in gradschool everyday in his Jersey City classroom.

Due the pandemic, much of our communication with colleagues remains virtual. Today, I had the opportunity to catch up with two Seton Hall alumni via a virtual chat. These colleagues are recent graduates of the College of Education and Human Services' Education Leadership, Management and Policy (ELMP) master's program.

The earliest arrival to our online meeting was Samuel McGhee who expressed how much confidence he gained by being in the graduate program. Sam has been teaching in Jersey City for just over 17 years. Where he currently leads a self-contained classroom. He is also a family man. Sam and his son Sean have a podcast that explores the father/son relationship.

Sean graduated this year with a bachelor's degree from Rutgers University and Sam is encouraging him to continue on to a graduate program. He says he experienced the many benefits of earning a master's degree firsthand, both from a technical point of view and from the leadership skills which he applies both in and out of his classroom. Sam noted that he thought he knew how to research, and like many, leaned heavily on Google searches, but being a member of this program taught him the process of professional researching. He's also applying his leadership skills outside of the classroom. Sam recently became a landlord and has started renting apartments as a business.

Liz Silvas said the personal connections she made as a grad student was one of the benefits of the program.

Sam could not recall exactly how his journey to Seton Hall began, but he did remember meeting James Corino, E.D., director of the ELMP program, early in the process. Elizabeth Silvas, a supervisor at the First Children's School in Fanwood had a similar experience meeting connecting with Dr. Corino who helped set her on her path to grad school. Liz is a cohort member and colleague of Sam's. Her position as a supervisor provides opportunities for her to use the skills that she acquired in graduate school. She regularly applies resources from her Ethics and Supervision course in her current position and draws on concepts from those lectures. Liz began her new supervisory role a year into the program.

Both Liz and Sam mentioned the interest and personalization that the professors took in their success, which extends beyond the classroom. Sam mentioned Professor Chris Tienken, who commented thoughtfully on his niece's paper, which he had shared because it was relevant to a discussion on diversity that they had in a curriculum course.

Sam enjoys teaching but likes the idea of having the option to choose an administrative path now that he has another degree. He is currently submitting applications for administrative positions. Liz would like to get into administration in higher education. She believes that she made a wise investment by pursuing a graduate degree. Liz hopes to return to Seton Hall to work toward her doctoral degree in education.