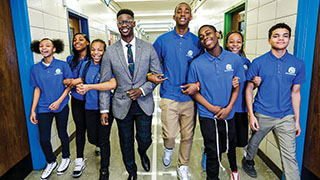 Professor Edmund Adjapong, program director in the Department of Educational Studies at Seton Hall University, has published the second volume in a series on what has come to be known as "Hip-Hop Education."

The series is entitled HipHopEd: The Compilation on Hip-Hop Education and is intended to provide new practical and strategic insights for scholars, practitioners, students, community members and policymakers as it relates to working with groups who have faced systemic oppression.

In Volume 2: Hip-Hop as Praxis & Social Justice, Adjapong and his co-editor, Ian Levy, a professor of school counseling at Manhattan College and vice president of Counselor Educators for the New York State School Counselor's association, have primarily addressed "knowledge of self." The editors contend that knowledge of self is a critical element of hip hop culture – and education – for both students and educators.

Hip Hop Education is a burgeoning movement within teaching that seeks to recognize and affirm the cultural identity of what has come to be known as "The Hip-Hop generation." Hip-hop educators approach their practice and research using a framework anchored in hip-hop culture, key elements of which are defined within the culture as graffiti, the MC (Master of Ceremonies), the DJ, breakdancing and knowledge of self.

In the first volume of the series, Hip-hop as Education, Philosophy, and Practice, the authors showed how each of the first four elements of Hip-Hop culture could be broken down into guiding principles for educators. For example, Adjapong points out that MCs are generally accompanied by a "Hype Man," who needs to know the underlying content of the presentation thoroughly in order to function as a complement to the MC. In the Hip Hop Ed model, educators are encouraged to think of themselves as MCs and to empower their students to function as "HypeMen" and women, cultivating a thorough command of the underlying materials in a way that allows them to essentially co-teach the class, which aligns well with research that shows students learn more from their peers.

In this second volume, published by Peter Lang, a leading academic publisher based in Switzerland, Hip-Hop as Praxis & Social Justice compiles the scholarship and narratives of veteran scholars, emerging scholars, and teachers who identify as hip-hop educators and highlights the realities of these educators who grapple with cultivating and displaying themselves authentically in practice. The book also offers examples of how hip-hop can be utilized in educational spaces to promote social justice.

"Institutions that do not see the power of hip-hop in educational spaces have a clear misunderstanding of the realities of youth" said Professor Adjapong. "And institutions that fail to recognize and affirm hip-hop as a cultural identity in their educators and scholars perpetuate a duplicity that fails to connect with the validity of lived experience. When educators and education itself are cut off from the reality of lived experience, experience tells us that failure is almost certain."

Citing Professor Christopher Emdin of Teachers College, Columbia University (who is a general editor of the series and considered by many to be the grandfather of #HipHopEd), the editors argue that for the hip-hop generation, survival in all levels of the educational system has often been contingent upon one's ability to forgo displaying their real self (and the journey towards self-actualization all together), to publicly embrace an ideal self, that is defined by White American values.

Adjapong and Levy conclude that "In a sense, education systems, across the lifespan, promote incongruence. This is a problem."

"Across America people are toppling statues and lowering flags that symbolize and honor racism," said Adjapong. "But the real edifice of structural racism in this country is the education system – and that has to change. We need to decolonize the classroom."

Edmund Adjapong, Ph.D., is an assistant professor in the Educational Studies Department at Seton Hall University. He is also a faculty fellow at The Institute for Urban and Multicultural Education at Teachers College, Columbia University and author of #HipHopEd: The Compilation on Hip-Hop Education Volume 1. A former middle school science teacher at a New York City public school in The Bronx, he is the director of the Science Genius Program, a program that engages urban students in the sciences through Hip-Hop, and the director of The Science Genius Academy, a program that encourages and prepares students to pursue STEM careers while providing mentoring and support. Adjapong has appeared on media outlets such as Hot 97's radio station and is a contributing writer for Huffington Post and The Good Men Project, where he writes and speaks about issues of race, diversity, social justice and education. Adjapong is also a contributor to the book The Stigma of Genius: Einstein, Consciousness and Critical Education, Second Edition (Peter Lang), which is scheduled to be released in August, 2020.