Guests of the World Leaders Forum 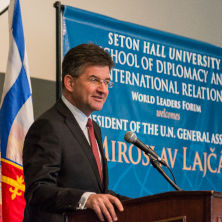 Visiting Seton Hall as the first stop on his college tour was Miroslav Lajčák, the President of the 72ndd Session of the United Nations General Assembly. He gave a public address on his vision of moving "Toward a New UN" where he outlined his plans for reform within the international organization.
Lajčák reminded the audience that "The UN was created for people. Its job is to help people who are striving for peace and a decent life, on a sustainable planet. It is one of the tasks of the General Assembly to make sure that their voices can still be heard." Following President Barack Obama's final State of the Union Address, the U.S. Permanent Representative to the United Nations, Ambassador Samantha Power, came to Seton Hall to hold a town hall meeting with students on some of the foreign policy themes raised by our nation's commander in chief.

The discussion, moderated by David Ushery, news anchor at NBC 4 New York, concluded with a final comment by Power on the role of America's guiding principles in our foreign policy, "The world respects us not just for our arsenal; it respects us for our diversity and our openness and the way that we respect every faith. Compromising on those core values has never made America more secure - and it never will." Rice explained that the U.S. is working to prevent atrocities and strengthening accountability when they do occur. She referred to recent legislation, signed by President Obama, that will "expand the State Department's authority to offer cash rewards for information leading to the arrest or conviction of individuals accused of atrocities by any international tribunal. We are committed to working with our partners to bring to justice those who are responsible for such unconscionable crimes." Students and community members alike applauded Ms. Gbowee for the heroism she displayed as a leading actor in bringing about the end of Liberia's civil war. She reminded the audience that many of the issues that exist in Africa are also present in New Jersey, and urged all present to address issues locally before tackling them on a global level. In the face of discouragement, she offered hope, reminding students that even a small action can chip away at the largest issue and make a difference. Mr. Ban addressed members of the Seton Hall community as crucial partners in uniting nations. He called for students' help in delivering what the world needs, specifically citing the importance of combating climate change, reducing poverty and reinforcing human security.

Prior to his address, an honorary degree from Seton Hall was conferred upon the Secretary-General. He graciously received this degree "as a testament to this close ties between the United Nations and Seton Hall and the Whitehead School in particular." Throughout his candid and witty remarks, Mr. Blair stressed the importance of cooperation in addressing three of today's most pressing global challenges: the economy, the environment and security. "We must work together," he said, "not just in traditional alliances, but in ones that bring together the developed and developing world.

In addition to his comments on climate change and peace in the Middle East, Mr. Blair urged students to adopt a set of global values to include a belief in freedom, democracy, justice, and the power of community. By acting upon such values, Mr. Blair continued, we can drive our world forward. Solidarity leader and the first democratically-elected President of Poland, Lech Walesa, addressed Seton Hall students, staff, alumni and friends in commemoration of the 25th anniversary of Solidarity, a grassroots union movement that brought an end to the communist government's control of Poland. President Walesa received an honorary doctoral degree given to him in absentia more than 23 years ago. In his address, Mr. Gorbachev addressed the challenges that have faced democracy throughout history and the potential roadblocks to its future success. Mr. Gorbachev noted that even victories come with challenges, referring to the situation in Iraq and the fall of communism during the Cold War. He discussed the need to take advantage of globalization, consider the interests of other countries, and address the problems of the environment and international security, as ways of helping democracy progress into the future.

Mr. Peres focused much of his address on modern issues facing the world, issues such as the struggle between religion and science, and war in the Middle East. "It is not a war against Muslims," he asserted. "It is a war for everybody, including the Muslims." Throughout his address, Mr. Peres highlighted the importance he places on peace. In recognition of his lifetime commitment to this cause, Seton Hall awarded him with an honorary doctoral degree.

John Hume, Nobel Peace Prize laureate, parliament member and founder of Northern Ireland's Social Democratic and Labour Party, was presented with an honorary Doctor of Laws degree at Seton Hall University. In his address, Mr. Hume drew on his experiences in the Northern Ireland peace process. He began by telling students that his father once warned him never to get involved in politics because: "You can't beat the flag." Continuing, he described his personal reflections on the peace process over the last 30 years, including the Good Friday Peace Agreement, and the Hume-Adams talks.

To read a transcript of Mr. Hume's address, click here »

Mohammad Khatami
President of the Islamic Republic of Iran, November 9, 2001

To read a transcript of the event, click here »

Gil Carlos Rodriguez Iglesias
President of the Court of Justice of the European Communities
November 5, 2001

To read a transcript of Mr. Rodriguez's remarks, click here »

Secretary-General Kofi Annan's address inaugurated the 2001 United Nations Year of Dialogue Among Civilizations and recognized the School of Diplomacy for it's work as the coordinating Secretariat for the project. In his address, Secretary-General Annan emphasized that "Alongside an infinite diversity of cultures, there does exist one global civilization based on shared values of tolerance and freedom. The diversity of human cultures is something to be celebrated, not feared."

Vatican Secretary of State Angelo Cardinal Sodano addressed Seton Hall students on the Holy See's presence in international affairs. Cardinal Sodano affirmed, "The lofty religious aim that inspires the Holy See's involvement in the international community, [is] that world affairs be imbued with the Gospel of the dignity of the person and the family, the gospel of harmony and peace, and, moreover, the Gospel of truth, justice, and love."

To read a transcript of Cardinal Sodano's address, click here »

Grand Duchess Maria Teresa of Luxembourg focused her remarks to the Seton Hall community on microlending. By extending small loans to help the world's poorest nations create their own employment, microlending brings economic opportunity to low-income peoples, especially women. The Grand Duchess confirmed for students her belief that, "the most fundamental change brought about by microcredit is the social change that happens to be connected with gender in many developing countries. The role of women is undergoing considerable change."

To read a transcript of HRH's remarks, click here »

Glafcos Clerides
President of the Republic of Cyprus
September 24, 1999

In his address, President Clerides reaffirmed for students a statement he had made the day prior at the UN on resolving internal discord within a divided Cyprus. He told students: "If there is going to be a breakthrough for the solution of the Cyprus division issue, it will greatly depend on the international community: what pressure it would exercise to bring the two sides to the negotiating table and to help them find a solution to the problem. It is of vital importance that the international community plays a role."

To read a transcript of President Clerides' remarks, click here »