US Ambassador to the UN: "You are reaching your rise." "We are reaching our sunset. You are reaching your rise." Those were the inspiring words of United States Ambassador to the United Nations Linda Thomas-Greenfield, as she concluded her address to an audience of students, faculty and alumni at Seton Hall on April 12. The event was part of the World Leaders Forum speaker series, sponsored by the School of Diplomacy and International Relations.

Guests attended in person on campus at Bethany Hall. Others were able to attend virtually via a live feed that has been made available via the School's website. While the ambassador's riveting address lasted just under an hour, she managed to share many insights and notable experiences from her diplomatic career. Courtney Smith, dean of the School of Diplomacy, was joined on the stage by eight student leaders who, together, moderated the event and posed questions to Ambassador Thomas-Greenfield.

The address, which was the first in-person World Leaders Forum event since Nobel Peace Prize Laureate Nadia Murad visited the University in 2019, received regional media attention with coverage by Newark-based NPR affiliate, WGBO and NJ.org, among other outlets.

The war in Ukraine, which was the topic on many people's minds was addressed first. Thomas-Greenfield described her participation in UN Security Council meetings during the lead up to the war and following the Russian invasion. She referenced how UN member states had succeeded in isolating Russia diplomatically. Addressing a question one student posed concerning the roadblock created by Russia's veto power in the Security Council, the ambassador said that Russia cannot "veto our voices."

Acknowledging that the war has created great human suffering and shaken the world, Thomas-Greenfield stressed that she and the Biden administration remain hopeful that diplomacy will prevail.

Students on the panel also raised questions regarding the global response to the climate crisis, and the distribution of COVID-19 vaccines in developing countries.

One student asked Thomas-Greenfield, who grew up in Louisiana, what career advice she would offer her younger self. "Don't define limitations, define potential," she offered. Recognizing the challenges women and minorities face professionally, particularly in the international relations, Thomas-Greenfield has truly owned her Blackness, whether she is negotiating with Nigerian officials or navigating the challenges of foreign service.

As one of the highest-ranking Black women to serve in the U.S. Department of State, the ambassador also spoke about the U.S.'s current agenda at the United Nations, and diversity within diplomacy and international affairs careers and gender equity. Thomas-Greenfield spent 35 years in the Foreign Service and retired in 2017, serving as Assistant Secretary of State for African Affairs between 2013 and 2017.

She was also Director General of the Foreign Service and Director of Human Resources between 2012 and 2013. Before these culminating assignments, she was Ambassador to Liberia and held postings in Switzerland, Pakistan, Kenya, The Gambia, and Jamaica.

During her address, Thomas-Greenfield shared stories about her approach to building relationships through what has become known as "gumbo diplomacy." The ambassador explained how she likes to prepare traditional Cajun dishes for her colleagues and foreign counterparts to help find common ground and build personal connections.

"Ambassador Thomas-Greenfield has had a distinguished career, and we thank her for spending time with us here at Seton Hall," said Associate Dean, Elizabeth Halpin. "We wish her the very best and stand ready to be of service as she represents our country at the United Nations and takes up the many challenges our world faces."

To watch a recording of Ambassador Thomas-Greenfield's address at Seton Hall, please visit the School of Diplomacy website. You can also read a blog post written by Shweta Parthasarathy & Jasmine De Leon about the Ambassador's visit. 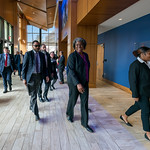 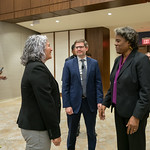 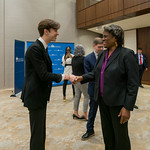 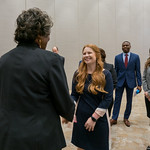 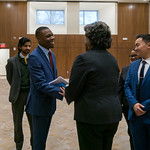 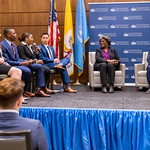