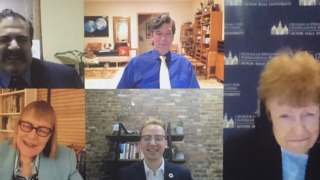 The panelists presented different perspectives, engaged in a discussion, and answered questions about how the United Nations has impacted the international political stage over the past 75 years and how the world can move forward on its mission.

The event began with a keynote speech by His Royal Highness Prince Adnan El-Hashemite, an activist and member of the Hashemite Royal House of Iraq. HRH began his speech on a hopeful note, asserting that the UN has delivered many great achievements unto humanity.

"I am here to remind everyone why the UN was created," he said. "It was not created to be a club for the influential, powerful, or the wealthy. The UN is the house where we all can go when we need help."

HRH made two primary arguments in his speech. First, he recognized how non-governmental organizations (NGOs) and civil societies are crucial to the success of the UN. Going further, HRH stated that the UN should "co-sponsor - financially and morally - the actions of every NGO on earth," and create a "simplified information sharing system where any NGO can directly reach out to the UN."

Secondly, HRH declared that it would be a "disaster" if the UN were to be dismantled and that the UN must be protected and preserved. He acknowledged that the UN is not perfect, but also stated that it is "the only grounds in the entire world that can bring us all together."  HRH called for the UN to reduce bureaucracy, eliminate politically-favored decisions, and down-share responsibilities with NGOs and civil societies around the world. 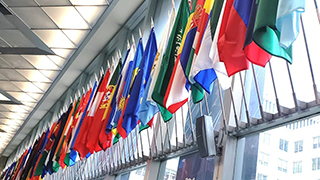 The first panelist, Catherine Tinker, J.D., J.S.D., is a Distinguished Fellow at the Center for UN and Global Governance Studies, Adjunct Professor at the School of Diplomacy and International Relations, and Founder of the Tinker Institute on International Law and Organizations. Dr. Tinker described four ways in which the UN has served the world thus far: "as a talk shop where diverse voices can be heard, a laboratory of new ideas, a place of dialogue, and a place for the progressive development of international law."

Dr. Tinker recognized the successes of the UN, but also identified its shortcomings. One example is how the many foundational UN documents, like the UN Charter, do not explicitly refer to a human right to a healthy environment. However, Dr. Tinker acknowledged that the UN has made - and continues to make - progress to address environmental concerns.

The second panelist, Reverend Robert Chase, is a Fellow at the School of Diplomacy, minister for the United Church of Christ, and Founder of Creative Connections in Media. He asserted that religion is a significant factor that is shaping the current generation, but it is often excluded or overlooked when making policy decisions.

Rev. Chase made two suggestions for ways that the UN can create meaningful change. His first recommendation is that the UN should increase engagement with interreligious organizations. His second proposal is that the UN offer resources on how to navigate social media—a "constant force" and "danger" that has made it increasingly difficult to tell what is authoritative or fake news. This is important, he noted, because "youth are our most precious resource and the ones most susceptible to social media driven fake news."

The last speaker was Dr. Mary Norton, a Fellow at the Center for UN and Global Governance Studies and internationally-renowned researcher and professor. Dr. Norton focused her presentation on the importance of global education. She described how education creates global citizens and leaders with the skills and values needed to adapt to an ever-changing and interconnected world.

The remainder of the event consisted of a dialogue between the panelists, who were asked questions by UNA-SHU students and audience members. Each of the panelists expressed different views on the UN's greatest accomplishments over the last 75 years: connecting world cultures, creating a forum for productive discourse, advancing the progress of the Sustainable Development Goals, and preventing World War III.

The most common theme that the panelists echoed in resounding consensus was their hope in the younger generation. The biggest takeaway of the event is that young people are going to be the generation to create change and make a difference in the world.