While the conference Secretariat encountered some difficulties surrounding the new online medium, most staffers agreed that overall, it ran smoothly. Carter Bryant, a sophomore currently serving as the Secretary for SHUNA, spoke on their experience as the Chair of a Joint Crisis Committee. "It was definitely a feat. I'm glad it happened, and that [Secretary-General] Stephen went through all the legwork of setting it up," said Bryant, "I had an overall positive experience." Julia Nicolls, the chair of the other side of the Joint Crisis Committee, similarly felt that "everyone did a great job given the circumstances, and the conference ran very smoothly." Both Bryant and Nicolls agreed that running a committee online took some adjustment but was just as easy as an in-person experience once they got used to it.

HallMUN also allowed freshmen and new SHUNA members to staff committees. Although some staffers like Olayinka Bishi, a freshman in the School of Diplomacy and International Relations, would have preferred their first experience to be in person, the experience was positive overall. Bishi added that HallMUN being the "first online conference to be held speaks volumes" to what the future may hold.

The committees were wide-ranging and dealt with a variety of topics. The International Atomic Energy Association committee discussed Nuclear Power in the 21st Century and Uneven Authority in terms of nuclear power. Crisis committees, which featured adaptive situation updates, included Disney's Board of Directors, the 2015 cabinet of Alexis Tsipras, the Council of Rapture, Huey Long's Associates, and the Board of the Church of Scientology. There was also a joint crisis committee with opposing sides of World War I: the Ottomans and the Triple Entente. The committees were mainly led by upperclassmen, with the exception of freshman Evelyn Tilelli, who served as the Chair for Disney's Board of Directors. Tilelli complimented the secretariat's ability to adapt to "Zoom Model UN" and was pleased that the experience was "engaging and inclusive for all delegates and staff." Like many of the other staff members, Tilelli is "excited to see where this conference will go in the future." 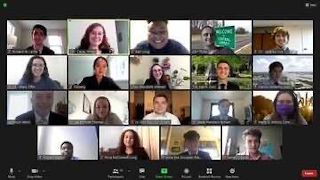 Students represented 12 schools from across the country, including Emory, Georgetown, Rutgers, Indiana and the University of Alabama.

In addition to the overall conference logistics, each committee also ran smoothly. For example, HallMUN's only General Assembly committee, the International Atomic Energy Agency (IAEA), adjusted well to the new medium. Peter Eggerding, the co-chair of the committee, said of the Model UN experience, "The reason MUN is so interesting is because deals that would never happen in real life can get made by delegates sharing and compromising." The co-chairs also stated that the committee went smoothly, despite the technology change, and both delegates and chairs were eager to be there.

HallMUN's crisis committees also had similar success in adapting to a completely online conference. The Cabinet of Alexis Tsipras reportedly ran smoothly and encountered very few problems throughout the conference. Chair Kaitlyn Akroush expressed that the committee was excellent and that she had a wonderful time chairing, stating that it was interesting to see such creative ideas. She also mentioned that the number of delegates was smaller than expected but that it allowed more room for discussion.

Overall, the conference was a success, according to both the delegates and the staff. According to Stephen Hoffman, the Secretary-General for HallMUN 2020, the response was "overwhelmingly positive." He reported that one head delegate said that the conference was run as though "it had been run for five or ten years, not the first year." Several other veteran delegates described the conference as "the best experience they have had with Model UN." Similarly, the consensus from staffers was that despite the obstacles faced by the secretariat and staff, HallMUN was a successful start to what will hopefully become a long-standing tradition at Seton Hall University. The online medium created a challenging set of circumstances, but as echoed by some of the staff members, being successful in these times means much more can be accomplished in the future.