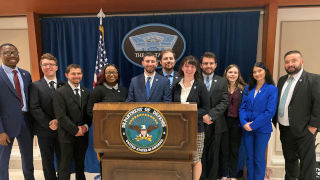 The 2021-2022 National Security Fellowship (NSF) graduate student research team briefed leaders in the U.S. Department of State from the Bureau of Intelligence and Research, Office of Analysis for South Asia, Foreign Affairs Officers for Assistant Congressional Affairs and Consular, Bureau of South and Central Asian Affairs, and Pakistan Affairs on Wednesday, April 27, concluding their yearlong project for the agency.

Working under the guidance of National Security Fellow and alum Mohamad Mirghahari, (B.A. '02/ M.A. '04), the NSF team spent the year researching, writing, and drafting an operational paper and informational presentation with policy recommendations on how the U.S. Department of State can work to enhance the U.S.'s strategic relationship with Pakistan in light of growing concern of great power competition in the region.

Pleased with the work of previous years' projects, the Department of State, specifically the Director of the Office of South Asian Affairs, Harold Ingram, and his team, requested the NSF to look into the strategic relationship between Pakistan and the United States and the greater implications for the Indo-Pacific region. Working through multiple iterations, the NSF addressed the U.S. relationship with Pakistan at several levels as well as identified avenues to invest and build better relations with India in their paper titled, "Enhancing the U.S. Strategic Relationship with Pakistan: A Multifaceted Approach." The team addressed five lines of effort: strategic messaging, public diplomacy, security, environment and climate, and the economy to strengthen the relationship between the two states. The presentation was shared across offices affected by Pakistan and Indian affairs and referred to the USAID (United States Agency for International Development) Office of Pakistan Working Bureau. 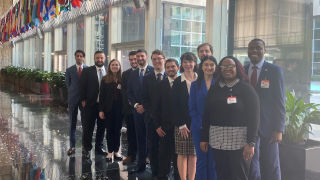 NSF research team briefed at the US Department of State.

In conversation with Dr. Abbas, students learned the rich story of the kinnow, which they implemented into their project. This fruit is similar to that of a mandarin orange and was developed through a collaboration between two universities in 1951. This fruit has become a staple product in Pakistan and demonstrates the long cultural connection between the two states. Students recommended highlighting this story to promote positive narratives, which members at the State Department demonstrated interest in through follow-up questions and comments.

Following the presentation, students had the opportunity to meet with the Deputy Chief of Staff to the Secretary of State Jessica Thompson. With her extensive career in the government as Deputy Assistant to the President and Director of Scheduling and Chief of Staff for New York City's Mayoral Office of International Affairs, she provided career advice and discussed the role of high-level communications within the State Department.

In looking back on the in-person briefing, first-year graduate student Matthew Enterline said, "Despite all the research and practice done during the last two semesters, we had no idea what the reaction would be. Hearing from analysts that both our paper and brief were excellent, well thought out, and some of the best work that some said they had seen from any presentation was such a relief to hear." 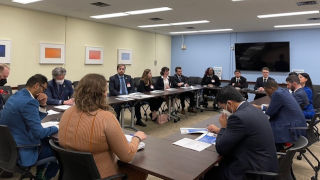 NSF research team briefing partners at US Department of State.

Graduating second-year student David Marina expressed his gratitude and appreciation and said, "I could not be happier to see not only the fruits of our labor come through and to see all my teammates, whether first or second year, rise up to the opportunity and give an amazing presentation and insightful presentation that really gauges the interest of our clientele. Seeing the looks on the analysts' faces and watching my teammates express themselves and explain such difficult concepts with so much confidence reminds me that the National Security Fellowship is not just an elite or small club, but it is a well-crafted team with some amazing and bright researchers."