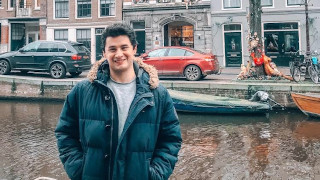 After graduating in 2019 Santiago Losada lived in a small city called Comrat, in a region of Moldova called Gagauzia, or as he called it, the "Land of the Gaga."

Former Slavic Club President, founding Brother of Phi Delta Theta, Diplomatic Envoy staff writer, and Fulbright Scholar are all words that can be used to describe Seton Hall University Alumnus, Santiago Losada. Those who had the pleasure to cross paths with Santiago were mesmerized by his passion for learning about languages and culture. After graduating in 2019, Santiago accepted a position as a Fulbright Scholar and traveled to Moldova during the 2019-2020 academic year.

Fulbright is an incredibly competitive academic scholarship. It gives students and professors the opportunity to travel to different countries to either teach English or conduct research. Seton Hall has produced multiple Fulbright Scholars, with Santiago being the most recent undergraduate student to receive the scholarship.

Santiago was unaware of the Fulbright Scholarship until his junior year. "They made an announcement, and a friend of mine was talking about going to the interest meeting, so I went along," he remembered. The meeting was at the end of the spring semester. He began the application process over the summer and worked on it into the beginning of the fall semester Santiago was chosen as a semi-finalist when the first round of applications was approved. An interview was issued, following which the first rounds of scholarships were awarded.

On April 4, 2019, Santiago received the news of his selection as an alternate scholar for Moldova. "Fulbright always holds an orientation at the end of July and that year it was July 20," Santiago stated. "I knew if I did not hear from them, I didn't get it." He explained that the waiting process was a nightmare because he was not sure how to plan the next few months of his life. Santiago began to move on from Fulbright and applied to various internships and master's programs until he received an email from Fulbright saying that he was selected as the scholar who would travel to Moldova.

When asked about why he chose Moldova, he related the decision to a class he took while at the School of Diplomacy: Sustainable Development with Dr. Nabeela Alam. Santiago described a project that he did for the class and how his group chose to focus on Moldova. "The project made me learn about the history, and the economics, and some of the cultural aspects," said Santiago. "It also really resonated with my whole journey with Russian too." Santiago further explained that his success in Moldova can be credited to what he learned from being a part of Slavic Club during his entire four years as an undergraduate.

During his time in Moldova, Santiago lived in a small city called Comrat, in a region of Moldova called Gagauzia, or as he called it, the "Land of the Gaga." While in Comrat, Santiago kept busy by volunteering at the local university, gyms, and NGOs. Two of the NGOs he volunteered at were Miras Moldova and Pro Europa; both focus on economic development, infrastructure, education, and youth employment. He taught English and Spanish classes at Comrat State University, teaching high school students, undergraduate students, graduate students, professors, and even the mayor of Comrat. While in Comrat, he also worked on his own research, which focused on economic development and investment strategies for Gagauzia and Moldova.

When posting about his travels and experiences on social media, Santiago would often use the hashtag, #LandoftheGaga, which was later utilized by the Gagauzia Tourism Center because of Santiago's frequent use.

Santiago's experience living abroad made him adapt to new experiences and realize everything he had taken for granted in the United States. He explained that one of the most challenging things about living in Moldova was not being able to have the usual amenities Americans are so used to having. At certain points during his stay in Moldova he said that he "had to live without running water for a few weeks every three or so months." Another difficult part of living abroad was adapting to the culture. There were many times where he was asked to give a presentation about a topic two hours before the meeting time, but that is very normal in that culture. "It's a learn as you go kind of experience," Santiago described.

While COVID-19 uprooted the lives of many people, Santiago tried his best to stay in Moldova. However, he had to leave when the U.S. Consulate issued a mandatory evacuation of the country. Due to this evacuation, Fulbright extended and renewed his scholarship. Santiago is currently awaiting the all-clear from the U.S. Consulate in Moldova before returning to Comrat. When asked if he would do it all over again, Santiago responded without any hesitance saying, "Absolutely. I would 100 percent choose Moldova again."