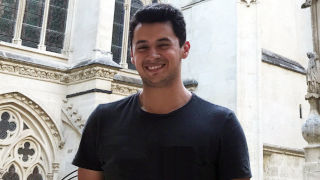 A recent graduate of the School of Diplomacy and International Relations, Santiago Losada, received a Fulbright Award to teach English and conduct a supplemental research project in Moldova.

Launched in 1946, the Fulbright U.S. Student Program is the flagship international educational exchange program sponsored by the U.S. government that offers research, study and teaching opportunities in over 140 countries to recent graduates and graduate students. Applicants can request grants for individually designed study and research projects, English teaching assistant programs or both.

A native New York resident and dual citizen of the United States and Spain, Losada grew up in a bilingual household where English and Spanish were spoken interchangeably. He wanted to learn something new—a new language and culture that was not routine to him, he said.

Losada said he first studied French in high school, but wanted to challenge himself with a more complex language when he came to Seton Hall. He decided to study Russian at the University. On his first day of class, he said it "clicked" for him and he knew he wanted to pursue opportunities to learn about and visit the countries in Eastern Europe. "Since freshman year, I knew that I always wanted to be involved in the region somehow," Losada said. "And I made a goal for myself that one day, I would visit this part of the world."

Losada said his passion for exploring Eastern Europe is what influenced him to select Moldova as his Fulbright country. He added that he was also inspired by a project he completed on the country for his Sustainable Development class, where he researched Moldova's youth unemployment. "The people in Moldova grow up bilingual, learning Russian and Romanian," he said. "I felt like I would have a connection with them, since I grew up bilingual and had a split linguistic identity, too."

Since his freshman year, Losada has actively been involved with the University's Russian department. He served as the treasurer, a public relations and hospitality officer and the president of the Slavic Club. Losada said he credits the organization for helping him gain a deeper understanding and appreciation of Eastern European culture. In addition, he said the club has helped him get to where he is today, having received the Edward J. Loyas and Cassie Zalinsky and Nora Barbusin endowed scholarships there. But most importantly, he said, the Slavic Club is where he met some of his closest friends.

"Santiago is very friendly, open-minded and has the natural ability to work in a group and relate to others," said Anna Kuchta, Russian language director and faculty adviser of the Slavic Club. "He is a born leader and very kind, sensitive and caring person. He's always ready to help others in their moments of doubt and difficulty."

Losada was a teacher's assistant during his time at Seton Hall, helping to manage multiple intermediate Russian classes and providing tutoring to students after class. He is also a founding father of the Phi Delta Theta fraternity; was a writer for The Diplomatic Envoy and the radio show, The Global Current; a member of the Seton Hall Consulting Group; and an intern for Senator Cory Booker and Network 20/20, a nonprofit foreign policy community.

"Santiago represents, in many respects, the best of Seton Hall's increasingly impressive top students," said Matthew Escobar, associate professor of French and Spanish and prestigious fellowships director. "He has consistently striven to expand his cultural and linguistic areas of expertise by pursuing advanced coursework in both Russian and French. His experience on service trips to South America have added ethical and intellectual depth to his abiding engagement with various cultures and have bolstered his talent for diplomacy. His evident leadership skills will inform his teaching in Moldova and his research on the Transnistrian conflict as part of his Fulbright English Teaching Assistantship. We are very proud of his continuing success."

Losada will teach at Comrat State University for about 10 months, representing the U.S. as a cultural ambassador and helping to enhance mutual understanding between Americans and the people of Moldova. He will attend orientation at the country's capital city of Chisinau before beginning to teach.

When he returns, Losada said he plans to work in management consulting, as it will allow him the opportunity to continue traveling, hone his language skills, put into practice what he's learned at the University and offer more insight into international economic development and business.

He said he encourages other students to apply for the scholarship and to not be afraid to share their story with anyone. "Your story is the most important thing about you," he said. "It doesn't matter where you've been—what matters is where you are going."

Losada concluded, "I hope to become a future polyglot by learning as many languages as possible and I wish to become a future Renaissance Man. I am extremely grateful for Seton Hall and everyone who has helped me get to this point."

Students can learn more about prestigious scholarships and fellowships by clicking here.