Cardinal Peter Turkson will give the opening address at Seton Hall's Just Peace Through Nonviolence Conference on Monday, September 30 at 6:30 p.m. in Bethany Hall. A Ghanaian Cardinal, Turkson has played a leading role in spreading the Pope's concern for justice, peace and human rights.

Cardinal Turkson's address on the integration of peace and human development begins a two-day event, from 9/30 – 10/1, examining the implications of the messages of peace delivered by Pope Francis.

From the time of Jesus' crucifixion, the Christian story has been one that combines both violence and peace. The Gospel of Luke teaches that, as He was dying on the cross, Jesus called out: "Father, forgive them; for they do not know what they do." While deeply rooted in its commitment to Jesus' words and actions, the Church has also been challenged by the complexities of war and peace, and has at times condoned, ignored and even encouraged violence.

Since the papacy of Leo XIII, who led the church at the close of the 19th century, however, popes have emphatically, and consistently, advocated for peace. They have championed a peace that is rooted in support of truth, charity and justice. They have taken a stand against wars and worked with world leaders to find peaceful solutions. Popes have addressed issues as diverse as immigration, racism, gun violence, the arms race and climate change—which play out in the modern political arena.

This fall, at a time in which the United States is actively negotiating peace in Afghanistan, and rethinking its strategy in Iraq, Syria, Libya, Korea and Iran an interdisciplinary group of scholars will lead a conversation dedicated to deepening the understanding of the Christian story, by focusing on Pope Francis's teachings. The gathering will also highlight the continuity of teachings on peace (magisterium pacis) from Roman Catholic Popes since Leo XIII (1878-1903).

Seton Hall's Peace Conference, which is open to the public, will use Pope Francis' teachings as a guidepost for examining what it means to live and promote peace in the context of today's cultural and social currents. Discussions will also be informed by the church's teaching on aspects of social and cultural life including war, economics, education, inter-religious dialogues and health care. Veterans, families of veterans and members of parishes are warmly welcome. 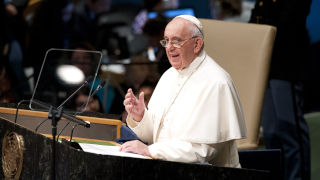 Pope Francis has addressed peace and nonviolence formally through Church encyclicals and has appealed to all in his annual message to the world. He has spoken out on behalf of migrants and refugees, calling for a "spirit of compassion" for those who are forced to leave their homelands amid war, hunger, poverty and persecution.

His teachings on nonviolence have been heard in parishes around the world and in the United Nations General Assembly, where Pope Francis has addressed heads of state and international diplomats. "Bringing peace is central to the mission of Christ's disciples," Pope Francis said, speaking on World Peace Day last January. "That peace is offered to all those men and women who long for peace amid the tragedies and violence that mark human history."

The conference is sponsored by Seton Hall University's School of Diplomacy, Center for Catholic Studies, Immaculate Conception Seminary, Jewish-Christian Studies, Department of Religion, and CORE, as well as the Catholic Non-violence Initiative.

Event Highlights
Cardinal Peter Turkson was president of the Pontifical Council for Justice and Peace from October 2009 until January 2017, when the competencies of that office and three other dicasteries were merged into one new department within the Roman Curia, entitled The Dicastery for Promoting Integral Human Development. Pope Francis named him the first prefect of that new dicastery. In addition to Cardinal Turkson's opening address, conference speakers will include members of Seton Hall's faculty and administration joined by scholars from outside the University. Maria Stephan of the U.S. Institute of Peace will provide the keynote on October 1 on the effectiveness of nonviolent action. Ken Butigan, Director of Peace, Justice and Conflict Studies at DePaul University will explore the topic of the responsibility of higher education for peace, nonviolence and human development.

To learn more and register to attend, please visit our conference page.