What Great Minds Can Do: Sunny Jiten Singh 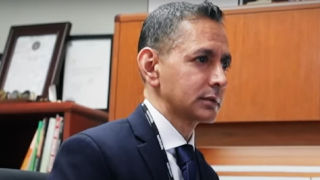 Central Intelligence Agency (CIA) officer, Sunny Jiten Singh, Ph.D., is a public servant of the highest order. He has held many positions, from political analyst, to CIA liaison to the Department of Defense, to presidential daily briefer, to chief of corporate strategy and education on diversity and inclusion. Dr. Singh also holds a Doctorate (2007) in Global Affairs from Rutgers University and is a published author. In 2019, he held a post-doctoral position as a Recanati-Kaplan fellow at the Harvard Kennedy School Belfer Center for Science and International Affairs. He graduated from the School of Diplomacy in 2003 and joined the CIA in 2006. He credits his time at Seton Hall as a major contributing factor in his professional successes. In his words, "The School of Diplomacy and International Relations at Seton Hall opened my eyes and doors on several fronts." In his work today, Dr. Singh identifies parallels and similarities in his organization's ethos with that of SHU; central are service, allowing diverse perspectives through focusing on inclusion, and talent building through spirit and mind as well as heart.

He recalls that in his early campus days, the environment and chapel provided a peace of mind nostalgic of his young years at St George's in India, where discipline and rigor were first instilled in him; qualities that Seton Hall University (SHU) strengthened through the teaching and learning provided by faculty who included Dr. Bariagaber, Ambassador Kamal, Dr. Courtney Smith and Dr. Webb.

Dr. Singh began his graduate career at the School of Diplomacy and International Relations while working for New Jersey Secretary of State DeForest B. Soaries under then Governor Christine Todd Whiteman's administration. In 2002, he opted to focus on his studies and left his job in state government.

As a student, Dr. Singh took advantage of the School's emphasis on professional development and experiential learning. He had the opportunity to work on the United Nation's Year of Dialogue Among Civilizations Book Project, working with the UN's group of eminent persons. He also interned for Senator John Kerry doing foreign policy work just before the Senator's run for president. The internship had a strong bearing on Dr. Singh's position with the CIA today. He says, "This experience coupled with the very fresh mindset of terrorism on September 11, just two years prior, propelled me to apply for the CIA while on my internship tour."

He said that study in Diplomacy and International Relations had been paramount in providing depth and breadth in as far as the challenges faced, especially on a post 9/11 paradigm - "They have provided us a means to dissect, and analyze and propose solutions based on lessons learned, so that we don't hit the same mistakes… that is really significant." Dr. Singh reminiscences about the important insights into foreign affairs the School of Diplomacy and International Relations facilitated through guest speakers comprising domestic, international and policy leaders in their fields.

Since his time at Seton Hall, Dr. Singh has kept in touch with alma mater. His contributions to Seton Hall as a student, a professional, and an alumnus were celebrated in 2012, when the School of Diplomacy awarded him the Many Are One Alumni Service Award for his service, dedication and leadership.

During a SHU alumni panel discussion held on April 22, 2021, via Zoom, Dr. Singh shared some advice once given to him by a senior government official, and which was probably useful to all alumni: "Don't be monotonous." Dr. Singh explained that though the message initially left him thinking, he quickly interpreted it to mean avoiding the monotony of only sticking to one's area of expertise for many years of a career, but rather have varied experience, and see how all the pieces fit into the entire puzzle to ensure success.

Finally, he advised anyone considering a career in the intelligence service not to under sell themselves, put something away or turn something down when looking at potential options and not to have a psychology that limited what they could do. As he phrased it, "I think you should keep the aperture open and go for it. What's the worst that could happen? But do not sell yourself short."