Board of Advisors: James A. McGreevy, III 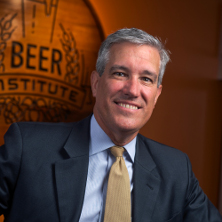 Mr. James A. McGreevy, III, '86, serves as president and chief executive officer of the Beer Institute. The institute is a national trade association representing America's brewers, beer importers and supply-chain partners. The $246 billion industry supports nearly two million American jobs. Prior to joining the Beer Institute, McGreevy worked extensively with the American Beverage Association (ABA). He served as its vice president for state and local affairs before transitioning to senior vice-president for government affairs. Mr. McGreevy also served as a senior associate at Larkin Hoffman Law in Minnesota prior to his roles with the ABA. James McGreevy received a B.A. from Seton Hall University and a J.D. from the University of Bridgeport School of Law. He previously served as a Policy Fellow at the University of Minnesota's Humphrey Institute of Public Affairs from 2003-2004.