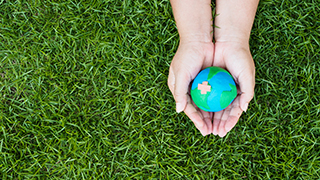 In some Core classes around this week, or before or shortly after, students will read Genesis 1-3, in connection with Galileo's and Darwin's writings. These texts are not simply there to offer contrasting positions. In fact, they complement each other, particularly so in the case of Galileo, who, as I mentioned last week, spoke form a strong position of faith closely linked to science.

Genesis 1-3 offers some important perspectives that actually link closely with science, particularly regarding the environment. First, we are introduced in Genesis 1 to the creation of the universe "ex nihilo" (out of nothing) and ineherently good, created by a God who wanted it and spoke it into being. The poetic language of Genesis conveys the beauty and sacred nature of creation. Science, rightly understood, explores and explains this nature, in a respectful and nurturing way. When human knowledge is used to exploit and uproot and even to destroy nature, then the basic principle of the goodness of nature is being attacked. Pope Francis' encyclical on the environment, Laudato Si, uses science to explain how the earth has not been respected and nurtured by humans.

In Genesis 2, we see how humans are created in the image and likeness of God. They are given a task to care for and to nurture the earth. This is exactly what has been neglected and even worked against in many cases in today's world. Science can be used to help the environment or to hurt it. Pope Francis consulted widely with the scientific community when writing Laudato Si because he wanted to speak to all people, not just believers, and to convince them that steps must be taken to ensure the protection and survival of the environment. Humans are given the task of caring for the earth. It is a moral and ethical error of great magnitude to read that as dominance in the sense of the justification of exploitation and harm toward the earth.

Genesis 3, in fact, offers a moral and theological explanation of the problems we see what humans have done to the natural world. When sin comes into the world, through the disobedience of Adam and Eve, evil is unleashed into what had been a Paradise. The selfishness that is enacted in the original sin is also reflected in the assaults on the environment by fallen humanity. In the recent film by Wim Wenders', Pope Francis: A Man of his Word, the Pope talks about how the most abused, the "poorest of the poor" is Madre Tierra, Mother Earth. We humans have used our knowledge, even at times our scientific knowledge to do this to our natural environment. Science is showing us the extent of the damage and some of the things we can do to undo, at least in part, what we have done. Laudato Si explains the moral, ethical, as well as the religious reasons for doing so. If we allow science to interact with faith and morals, we will be guided to a repentant and nurturing attitude to our beleaguered planet. Doing something for the environment would be a wonderful way to begin the holy season of Lent.