The University Core was very happy to participate in the "Just Peace-Making through Non-violence" Conference, held at Seton Hall University Monday, Sept. 30 – Tuesday, Oct. 1. This Conference was sponsored not only by the Core, but by the School of Diplomacy, Catholic Studies, the Department of Religion, the Seton Hall Community of Sant' Egidio, and the Immaculate Conception Seminary School of Theology. A committee representing all of these constituencies planned this event for many months. The idea was to examine non-violence as expressed by the Magisterium Pacis, that is, papal pronouncements on the subject of peace. This particular conference focused on the teachings of Pope Francis, which were often referenced by the speakers. We were all excited by the result. A key component that went into the planning was having the sessions scheduled around student classes, particularly Core classes. This way, it was easier than is sometimes the case for faculty to bring their entire class to various sessions. As a result, more than is typical at a conference of this kind, many young people were in attendance. In fact, students from one high school, Benedictine Academy, were also in the audience. Since the theme of the conference was peace through non-violence, the various speakers addressed the ways in which non-violence can be used to cultivate peace, more effectively and permanently than violence can. This point, a central one permeating the conference, was driven home by Maria Stephan, keynote speaker during the Tuesday lunch meeting, as she has studied movements of change in society over the last 100 years. She proved statistically that non-violent movements of social change are at least twice as likely to succeed as violent ones.

The conference began with a prayer, led by Seton Hall's Sant' Egidio Prayer Community. Each member present read a Scripture or prayer, and this brief but meaningful moment gave a flavor of the regular meetings of the prayer group. We were very blessed to have Joseph Cardinal Tobin present, and he both opened and closed this prayer, "in the spirit of Asissi." Next were encouraging and welcoming remarks by Seton Hall's new President, Dr. Joseph Nyre, followed by a talk written by Peter Cardinal Turkson, Prefect of the Dicastery for Promoting Integral Human Development, previously Archbishop of Cape Coast, in Ghana. Since Cardinal Turkson could not be present, his talk was read by his assistant, Fr. Mahar, who did a wonderful job of bringing forth the Cardinal's deeply reflective and meaningful words. This talk was followed by breakout-sessions, one on Peace and Parishes, led by Patrick Manning, who teaches practical theology at Seton Hall's Immaculate Conception Seminary School of Theology, and another on Non-violent Action, led by Marie Dennis, former president of Pax Christi International and author of Choosing Peace: the Catholic Church Returns to Gospel Non-Violence. The next day was very rich, beginning with an opening address by Eli McCarthy, on the steering committee for the Catholic Non-violence Initiative Director of Justice and Peace for the Conference of Major Superiors of Men. Eli helped the committee enormously in our planning of the conference. His talk was followed by a presentation by K. C. Choi, Chairperson of the Department of Religion, on the Human Person's Responsibility for Peace, Non-violence and Human Development. The Discussants were Rev. Forrest Pritchett, Director of the MLK, Jr. Scholars Program, teacher in the Core, and member of the Core Advisory Board, and Peter Savastano, of the Departments of Anthropology and Religion, also a Thomas Merton Scholar. All three presented on the topic of non-violence with depth and complexity, as well as spiritual insight. The two breakout sessions were led by Eli McCarthy, on Just war To Just Peace Approaches, and by Ines Murzaku, Chair of the Catholic Studies at Seton Hall and a specialist in Byzantine and Catholic Church history, on the topic of Mother Teresa and Non-violent Peace-making. I attended the latter talk and truly enjoyed seeing photos of Mother Teresa that were personal, such as her jumping rope with a young boy, and hearing from Dr. Murzaku some of the background many do not know about, for example, how Saint Teresa's Albanian heritage (something Dr. Murzaku shares) informed her attitudes about peace.

I mentioned the wonderful talk by Maria Stephan, Director of the Program on Non-violent Action at the U. S. Institute for Peace, regarding the success of non-violent campaigns as compared with violent ones, given during the lunch period. Lunch was also accompanied by beautiful music by Maestro Jason Tramm and the Seton Hall University Chamber Choir. The first song they did, at the request of Msgr. Dick Liddy, was a musical adaptation of a poem by soon to be declared Saint John Henry Cardinal Newman, "Lead, Kindly Light." The next formal session, led by Ken Butigan of DePaul University, examined the University's Responsibility for Peace, Non-Violence and Human Development. His talk was interesting and inspiring, as he emphasized ways universities can engage issues of peace and justice, something he is involved with on his campus as well as others, and the Discussants, Melinda Papaccio, who teaches in the departments of English and the Core, and Gregory Floyd, Core Fellow, asked questions that were provocative and interesting. Ken said, "The Church … has begun to rediscover and reaffirm the centrality of Gospel nonviolence to the way of Jesus and the life of the Church, underscored by Pope Francis's 2017 World Day of Peace message entitled, ‘Nonviolence: A Style of Politics for Peace,' and two landmark conferences on nonviolence at the Vatican in 2016 and earlier this year. As one of the bishops succinctly put it toward the end of the second conference, ‘We need to mainstream nonviolence in the Church. We need to move it from the margins of Catholic thought to the center. Nonviolence is a spirituality, a lifestyle, a program of societal action, and a universal ethic.'" He ended by a passionate call to the audience to believe we can make a change. Note that the themes of the sessions moved outward (from non-violence and peace-making as experienced by the individual to the world) as the day progressed.

The final session concerned the United Nations and the Responsibility for Peace, Non-violence and Human Development by Elizabeth Defeis of Seton Hall's Law School, with three St. John Paul II Fellows as Discussants – Catherine Doolan, Janina Talamayan, and Michelle Perez. Dr. Defeis explained some interesting facts regarding the Vatican's connection with the United Nations, and the interns each told about their role working at the UN in the Vatican's embassy. The session showed the important work the School of Diplomacy does at the UN, allowing students to be involved to this degree. Eli McCarthy and Msgr. Richard Liddy gave some closing remarks, noting the importance of continuing to explore the topic of non-violence and expressing appreciation for all who were involved in this event.

Overall, the conference has inspired me, and I sense many of us who participated, to explore more intensely the role of non-violent peace-making in the church and overall. A key theme of the conference was that non-violence is far from passivity. Martin Luther King, Jr. was mentioned many times as an embodiment of non-violent activism, which is truly the opposite of passive acceptance of evil. Rather, non-violence chooses a Gospel approach to refusing violence and embracing peace and justice. Jesus is the ultimate model for this approach to evil, which in the Catholic Church seems to be a return to what was referred to in the conference as a "new-old" way, the practice of non-violence and peace-making, seen as central, if not nearly universal, to the life of the early Church. The Core can continue to explore these themes in many of the texts coming up in Journey of Transformation, such as the Gospel of Luke and Martin Luther King, Jr's "Mountaintop Speech." Core II also examines the themes of non-violence – war and peace – in such texts as Augustine's City of God, in which he brings out the "just war theory," mentioned often in the conference in comparison to complete non-violence and relevant to any discussion of the topic, and other texts important to it. We were very happy to be part of hosting this event, so closely linked to the themes we discuss in our Core classes and deeply relevant to the needs of the world today. 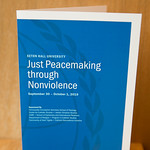 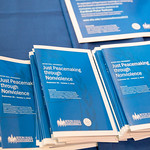 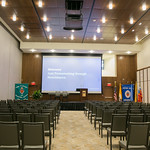 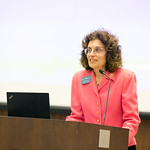 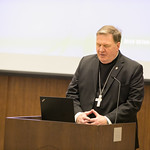 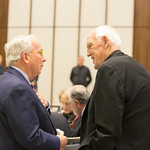 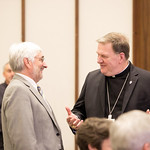 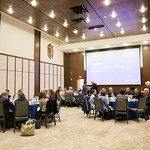 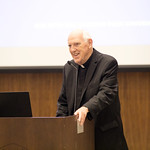 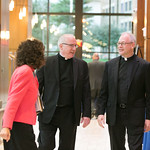 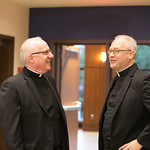 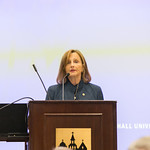