Before Clayton Collier '16 even stepped on campus for his first class, he was ready to dive into the world of radio broadcasting with WSOU 89.5 FM. The summer prior to his freshman year, he had already completed the station's required six-week training course and was ready for his on-air debut.

Fast forward to today, that same determination of the College of Communication and the Arts alumnus led him to his current role with ABC-affiliate Local 24 where he serves as a sports anchor, reporter and host for the Memphis, Tennessee, television station. Collier's time with WSOU is always with him – in fact, he was recently presented with the station's Distinguished Young Alumnus Award this past April.

"When I applied for the position [with Local 24], I was asked 'Why should we hire you when you have less experience than all of our other applicants?'" reflected Collier, who majored in journalism. "I cited my experience with WSOU – I had covered the MLB and NBA Draft, the 2015 MLB Hall of Fame Induction, called the 2016 Big East Championship when Seton Hall won over Villanova at the Garden and more. I could speak to certain real-world experiences that the other applicants didn’t have, and that is because of Seton Hall." 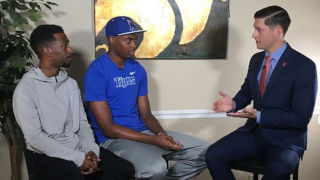 At Local 24, Collier covers the Memphis Grizzlies, Tigers, Redbirds, and other area sports teams. There, you'll find him preparing for his sportscast, editing a feature story, or going live from the field to provide updates to viewers and fans.

"Memphis is a fantastic sports market with a lot of different opportunities," Collier noted. "There are professional, college and high school stories out there year-round. Most of the time, I am also doing the shooting, editing and producing myself."

Part of Collier's job is seeking out stories that people don't know about.

"That is my favorite part of my job," he said. "Talking to a player or coach, and getting to share their story; one that might otherwise go untold. It's not just 'Hey they're succeeding in this sport,' but also discussing the obstacles they overcame to achieve success in their craft."

Before Local 24, Collier previously worked with NBC affiliate, KFYR-TV in Bismarck, North Dakota right after graduation. While the colder weather was definitely an adjustment for the Port Jefferson, New York native, he gained a new kind of experience – working on a broadcast crew for an entirely new area of the country.

Regardless of his geographical location, his education and background allow him thrive in every environment. "My classes gave me the foundation I needed for this industry," said Collier. "I apply skills from my journalism classes almost every day. Sometimes sports becomes the news. One day, I went to FedExForum to cover a Grizzlies game and a small fire broke out. I had to put my news reporter cap on, and relied on what I learned at Seton Hall." 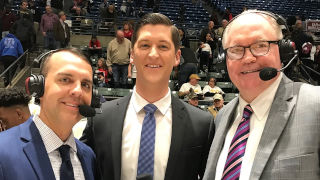 Outside of the classroom, the alumnus dedicated four years working as a student staff member for WSOU, becoming the station's assistant sports director in his sophomore year and later taking on the role of the sports director as a junior and senior. In those four years, Collier didn't just stay in the tri-state area – he traveled to over 21 states, three countries, and even interviewed the Wiggles for the radio station.

However, what was most compelling about WSOU was the uniqueness of the station's alumni network. "As a student, countless alumni helped me grow into the professional I am today, and the best part is I remain in contact with them," reflected Collier. "If you join WSOU, work hard, and network, you will be amazed at who is willing to lend a helping hand."

Working at the radio station is a special opportunity because it gives students the chance to be part of Seton Hall's history. "When you speak to alumni, it's a shared experience. You were both on campus, working at the radio station, sitting in that same chair– just being able to reminisce about WSOU with alumni is an honor," he noted. Collier himself is an active alum and returns to the College of Communication and the Arts when he can – to speak to students, or to represent the College at events.

"The trajectory of Clayton's early career achievements reflects the benefits of WSOU's approach of hands-on, experiential learning," said Mark Maben, WSOU general manager. "Clayton took full advantage of the station's emphasis on pre-professional development, our alumni network and the opportunities that come with being in the nation's number one market to ready himself to be a true broadcast professional.  We are proud of his quick rise within the industry and that he is already giving back to current students."

When he wasn't in the studio or in the classroom, Collier cultivated another passion – singing. He co-founded the Gentlemen of the Hall, Seton Hall's only all-male a cappella group, with classmate Kevin Scimecca '16. The student-led ensemble has performed in multiple venues since its inception, including opening for the Rockettes at Radio City Music Hall and performing the National Anthem for the New York Mets at Citi Field.

Although his undergraduate studies are over, the sports reporter encourages current students to "just say yes" to every opportunity. "Even if something is difficult, try it out," said Collier. "Because if it does work out, you never know where it'll lead you."

For more information about the Journalism program within the College of Communication and the Arts, please contact Associate Dean Thomas Rondinella at thomas.rondinella@shu.edu.

To help the College of Communication and the Arts continue preparing students for the world of media and beyond, make a gift of any amount through June 30, 2019. Your gift may help the college unlock $2,500 in additional funds. Learn more »