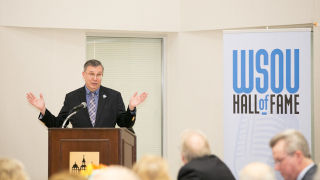 Bernie Wagenblast '78, Alumnus of the College of Communication and the Arts' WSOU.

WSOU 89.5FM Radio in the College of Communication and the Arts at Seton Hall is no stranger to graduating audio and broadcasting pioneers. One such WSOU alum has gone on to become one of the most recognized voices in the tri-state area.

Bernie Wagenblast '78 has had a remarkable career in broadcasting both on and off the air. Wagenblast initially decided to attend Seton Hall University because of WSOU, which was one of the first on campus radio stations to offer students on air experience. By his senior year he had worked his way up to station manager, and quickly realized he was destined for a life in radio. After finishing his studies at Seton Hall, Bernie got his first big break working as one of the original on-air reporters for Shadow Traffic, an organization founded in 1979 to provide transportation updates to multiple radio stations across the tri-state area. "That was a big moment for me," Bernie explained, "we were a bunch of twenty somethings that had never been on the air before, who were now suddenly doing traffic updates during rush hour, which at the time was the most listened to part of the day's broadcast. We were all extremely fortunate to get that break."

Not realizing his five years working for Shadow Traffic would ultimately define his career, Bernie followed his calling and spent the next three decades working in the transportation world. He has spent years working in the public sector for organizations such as the New York City Department of Transportation and the Port Authority of New York and New Jersey, in addition to many other voice projects for private companies. Most notably, Bernie has held the distinction of being known as "the voice of the New York City subway", providing updates and announcements to the millions of people who navigate its tunnels every week.

Bernie currently hosts two podcasts in addition to his many professional obligations. The first is Cranford Radio, a show dedicated to the current events of his hometown of Cranford, NJ that also features interviews with public officials and prominent locals. Additionally, Bernie also hosts Transportation Radio, a weekly podcast that strives to bring important information and topics of conversation to transit enthusiasts.

With decades of experience as a prominent announcer and years of podcasting under his belt, we asked Bernie a few questions about the many differences between podcasting and traditional radio, as well as how he believes podcasting will evolve in the next few years.

When were you first introduced to podcasting, and why did you decide to start your multiple shows?
I think I first started doing it around 2014. I had heard about it previously, but when I first heard about it, it was relatively complicated to get a podcast up and running. One thing I started was something I did really as a public service for the town I live and grew up in which is Cranford, New Jersey. It’s called Cranford Radio, and I do interviews with various people from around town. It could be elected or appointed officials, business people, clergy, you name it. I still enjoy doing that show, and I also started, I guess maybe a year and a half ago, doing a two minute or so newscast on Fridays, kind of recapping the big stories from the town from the past week and talking about what's coming up that weekend. The other podcast that I started simultaneously was transportation radio, which is pretty self-explanatory. It's a podcast about different aspects of transportation, focusing primarily on communications in the transportation field, but it actually can adapt into a few different directions depending on who the guest happens to be.

How does preparing content for your podcasts differ from a traditional radio broadcasts?
Well, I guess in terms of preparation, it doesn't offer a whole lot, but what does differ is how it finally comes out. There is still obviously researching the guests that you're going to be talking to and the subject that you're going to be speaking about, so that hopefully you’re well versed on what is going to be discussed and can ask intelligent questions.

What is the most rewarding aspect of podcasting for you?
I think for me, it's hopefully disseminating some useful information. You know, as a podcaster I'm certainly going to view myself as an entertainer as a lot of the popular podcasts are more in the entertainment genre. Whether it's a comedian that's hosting a podcast or one of these true crime stories that people listen to, the number of topics is limitless. Therefore I think podcasts, are ultimately for people who have a particular interest in a topic.

Going back to my college days I was always interested in the information side of news, which was what I really enjoyed doing, and that's what I worked in, whether it was being a traffic reporter or a news reporter. Podcasting is really just an extension of that, except it's more in-depth than you typically can do on the radio these days. You know, most of my podcasts for transportation run between 20 to 25 minutes. You usually can't do that kind of in-depth interview on the radio these days because that's kind of a timeslot just not available. To me that's the most rewarding part.

Podcasting has transformed the radio industry over the last ten years. Where do you hope it will go in the next ten?
I think almost every organization should have a podcast of some kind. Some sort of podcast that they provide because it's is a unique way to reach people that's different from what you can do online with just information on a screen or in print or even with television. One of the things that I think is really different about audio, and this is true whether it's radio or podcasting, is that when done well, it's more of an intimate experience between the listener and the person that's presenting. When you're listening to a podcast, you're usually listening by yourself, say, when you're exercising or when you're driving or commuting on a train, quite often it's with headphones or earbuds in your ear so that that voice is getting right into your head. It's not just being heard on a speaker in the background.

Now, there's some production work that has to go into it in terms of editing and things of that sort. I do think you'll see more and more organizations start podcasts…the same way that we went from the days of three networks that you could watch television shows on to an almost endless assortment of content. Now that you can tune in via streaming services such as Netflix or Amazon, you're going to have an almost limitless source of audio depending on what your interests are. Some are going to be mass market, but I think many others are going to be niche serving niche audiences.

What advice would you have for Seton Hall students looking to start a podcast?
I think the first thing is to become comfortable with some of the aspects of journalism, about researching the topic and asking questions that you think the audience would like to hear answered. That's one part of it, for sure. Another part is just the barriers to entry are very low these days, everybody has a recording device on their cell phone that they use to start a new podcast. So becoming familiar with the technology, beyond the basic fundamentals I think is good. A lot of the efforts that I've heard people start up with, it's fine for getting started, but I don't think it's necessarily good for the long run until they really know how to use that equipment.

Then the other big part is finding something that you're passionate about because that passion, I think comes through in the podcast. If it's a subject that you know a lot about are very curious about, that lends itself to doing a good podcast. On the other hand, if it's something that you don't have interest in and you're just doing it for the sake of doing a podcast, well, I think that would come through as well, and it's going to be obvious that you're not too interested in what's being discussed.

Both of Bernie Wagenblast’s podcasts can be streamed online for free via cranfordradio.com and transportationradio.com.

About WSOU
WSOU is a student-run, award-winning radio station of Seton Hall University housed in the College of Communication and the Arts. Established in 1986, WSOU has programmed a hard rock format and has become a national leader in college broadcasting after being consistently ranked in the top tier student-run electronic media outlets. Throughout its 71-year existence, WSOU has earned more than 70 industry awards, with the most recent one being the Marconi Award for "Noncommercial Station of the Year." In addition, WSOU operates 24/7, producing 8,760 hours of programming and reaching a weekly over the air audience of more than 78,000 listeners.