Ruth Tsuria, Ph.D., assistant professor of Communication in the College of Communication and the Arts, has been named the recipient of the 2019 Digital Religion Research Award by the Network for New Media, Religion and Digital Culture Studies at Texas A&M University. This newly established award seeks to recognize outstanding research in the field of digital religion studies, which explores the intersection between religion, technology, and digitally networked cultures. 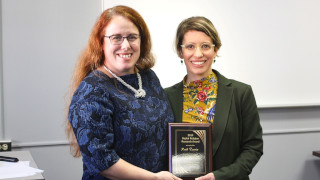 Founded by Heidi Campbell, Ph.D., a pioneer in the emerging field of digital religion research, the Network for New Media, Religion and Digital Culture Studies is the first academic network that seeks to recognize groundbreaking new research theories that advance the study of religion in digital media spaces. In order to have been considered for this new award, one must be an active scholar publishing an article that contributes to the theory proposed by Campbell and furthers the field of religion research. Winners were selected by an advisory board of appointed scholars who evaluated submissions based on criteria that furthers the understanding of religion and its relationship to digital media.

As part of this distinguished honor, Tsuria presented her work at Texas A&M University, returning to the university where she received her Ph.D. "It's incredibly meaningful for me to return to the place I called home for such an important part of my life," said Tsuria. "It makes me reminisce about those long nights as a student writing and researching, and to be able to return as an award-winning researcher and scholar is really exciting."

Tsuria's winning article, "Conservative Judaism in the Digital Age," examines the different ways in which conservative Jewish communities interact with digital media, and analyzes the effect it has on the community as a whole. The article presents many important discoveries, most notably being the technological evolution in how people practice their faith. Through her research she discovered that more established synagogues were seeing their numbers decline as they neglected the advantages of digital media, offering little in the ways of outreach or interactivity to their followers.

"There is this argument that comes up a lot, which is that religion is dying and somewhat passé, and that in order to have a religious experience you must go to a church or synagogue to find it. In my research I found that to be far from the truth, and instead the religious experience in recent years has been thriving online."

Tsuria's findings reveal it is the online communities of younger nondenominational members that are seeing an influx of participation and enthusiasm, using digital media to express how they see themselves spiritually. These inviting and engaging religious communities are helping people connect with their faith and understand their place in the world far more than the "old ways" ever could.

These unique and exciting perspectives might allow for new avenues of community outreach, but don't come without their disruptions. She suggests these opposing practices have created a tension among members of the community, driving a wedge between traditionalists and new age members.

If there is one recurring theme in Tsuria's background and work, it is that she chased her interests and never relented. No matter what academic pursuit she decided to embark on, she found success by remaining passionate about her two biggest interests: technology and religion.

Tsuria's academic philosophy can generally be captured by the idea of remaining passionate about your own interests. For Tsuria, those two biggest interests are technology and religion. "I always try to tell my students that as academics we are always learning and discovering which requires us to be adaptable. When I started my master's, I was so focused on digital media that I had no idea it would eventually lead me back to religion. I've been lucky to find success by staying true to myself and my two biggest interests."

For more information about Graduate Studies within the College of Communication and the Arts contact Ryan Hudes, Ph.D., at Ryan.Hudes@shu.edu.

For more information about the undergraduate Communication program, contact Amanda Carcione at Amanda.Carcione@shu.edu.