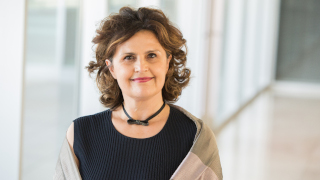 Ines Angeli Murzaku Ph.D., Professor and Director of Catholic Studies Program, an Alexander von Humboldt Research Fellow and Fulbright Senior Scholar, has published a new book focusing on the life and mission of the most celebrated woman-saint of the twentieth century, St. Mother Teresa of Kolkata. The book's theological framework is based on Pope Francis' theology of the peripheries and how this theology applies to the mission and work of St. Mother Teresa. This unique approach makes Dr. Murzaku's study current, theological, Scriptural and historical at the same time. The book is not a biography of St. Mother Teresa; instead, Mother's life is analyzed from the geographical, geopolitical, religious, existential, global, ecclesiastical and mystical peripheries.

Dr. Murzaku's book is published by a major Catholic Publishing House - Paulist Press, directed by the Paulist Fathers. This is how Dr. Murzaku, explains the inspiration behind the book and what unites Pope Francis and St. Mother Teresa:

"Close parallels can be drawn between Pope Francis' and Mother Teresa's theology of periphery. Both Francis and Teresa centered in the periphery and both served the Church from and in the geographic peripheries of Argentina and India. However, there is a ‘peripheral distinction' between the two: Mother Teresa's geography of serving the Church went from the Balkan periphery--Scopje--to the Indian periphery, or a full-circle periphery. On the other hand, Francis moved from the Argentinian periphery to Rome--the center. Nevertheless, both Mother Teresa and Pope Francis equally brought the periphery to the center of world's attention. They complemented each other. 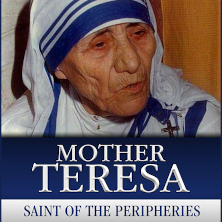 Mother Teresa and Pope Francis met very quickly in person. During his apostolic journey to Tirana (Albania) on September 21, 2014, in the country where Mother Teresa came from, Francis told journalists that he had seen her briefly, twenty years before, in 1994, at the Synod of Bishops in Rome when he was the archbishop of Buenos Aires. As Father Lombardi, the then-Vatican spokesman explained, Bergoglio sat close to Mother Teresa, who was behind him, and often heard her intervene with great energy, without being intimidated by that vast assembly of bishops. From that moment, he developed great esteem for her as a strong woman who was capable of giving courageous testimony. Bergoglio admired her strength, her decisive interventions, and her humility not to impress the bishops' assembly but to bring the pressing problems of the Church of the peripheries to the Bishops' Synod's attention. She said what she intended to say--no big words, no beating around the bush. ‘I would have been afraid if she had been my superior, because she was very demanding,' the pope added jokingly.

Bergoglio might have been intimidated by the tough, tiny, and straightforward woman coming from the peripheries and making a case for the new-found periphery of India in the Bishops' Synod without blinking an eye, but the two are closely aligned in the way they centered their apostolates and worldviews in peripheries. He would have never fathomed that he, the pope of the peripheries, would canonize the mother of the peripheries after 22 years, on September 4, 2016.

The Catholic Studies Program at Seton Hall University offers an innovative, interdisciplinary curriculum for students of any creed who are interested in deepening their knowledge of Catholicism's rich intellectual tradition and living heritage. Combining the study of history, philosophy, theology, literature, art, sociology, and other disciplines, Catholic Studies focuses on the church's dialogue with culture and encounter with the world. Students interested in Catholic Studies have the option to pursue a major, minor, or certificate that complements and enhances the university's other degree programs and fields of study.