In the context of the 23rd World Multi-Conference on Systemics, Cybernetics, and Informatics (WMSCI 2019), Catholic Studies adjunct faculty member, Father Joseph R. Laracy, was inducted into the inaugural class of Fellows of the International Institute of Informatics and Systemics for his contributions to interdisciplinary communication. Father Laracy also teaches in the Department of Mathematics & Computer Science as well as Immaculate Conception Seminary School of Theology. Fellows are the highest grade of membership in the Institute. Father Laracy received this designation for his contributions to interdisciplinary communication. SHU Math/CS Professor Dr. Thomas Marlowe was named a Fellow as well. A significant part of Father Laracy's research and teaching is focused on placing the Catholic Intellectual Tradition, especially Theology, in dialogue with the sciences: formal science (e.g., logic and mathematics), natural science (e.g., astrophysics sand evolutionary biology), applied science/engineering (e.g., cybernetics), and medicine (e.g., psychiatry). 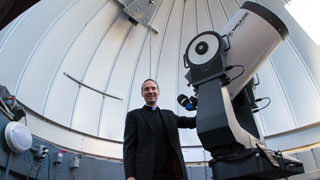 The origins of the International Institute of Informatics and Systemics were (1) the experience obtained organizing the 1981 UNESCO's Systems Congress, which was also sponsored by the WFEO (World Federation of Engineering Organizations) and (2) the knowledge apprehended in a 1975 PhD dissertation that provided a Mathematical Solution of the Condorcet Paradox which, at that time, was 185 years old. The main objectives of the IIIS are: to contribute to 1) the generation of synergetic relationships among different disciplines, and 2) knowledge integration; by means of fostering inter-disciplinary communication, epistemological pluralism, and intellectual diversity.

About Catholic Studies:
The Catholic Studies Program at Seton Hall University offers an innovative, interdisciplinary curriculum for students of any creed who are interested in deepening their knowledge of Catholicism's rich intellectual tradition and living heritage. Combining the study of history, philosophy, theology, literature, art, sociology, and other disciplines, Catholic Studies focuses on the church's dialogue with culture and encounter with the world. Students interested in Catholic Studies have the option to pursue a major, minor, or certificate that complements and enhances the university's other degree programs and fields of study. Over 20 years the academic program and its variegated activities have stayed true to and fulfilled the Catholic mission and vision of the University.