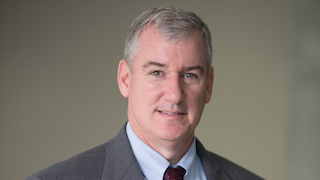 Catholic Studies adjunct professor Allan F. Wright, MA, a frequent guest on Relevant Radio and nationally known Catholic speaker, has published his sixteenth book. His latest publication, his first foray into historical fiction, is especially meaningful, as it documents his adventure in solving a mystery in his own family history. While Loch Arbour: A Hidden Life and Tragic Death on the Jersey Shore is not a strictly theological book, its true story turns on themes of forgiveness, unresolved guilt, religious faith, mercy, and compassion.

"Professor Wright's latest book is a tour de force, gracefully weaving theological themes into a story of real life in New Jersey a century ago," said Ines Murzaku, PhD, Chair of Catholic Studies. "It is easy to relate to this book and its characters because of Professor Wright's incorporation of theological elements. These same themes underpin our lives—we only need to be attentive enough to see them. The historical elements of the book, the local interest, and Professor Wright's passion for uncovering his family history make this an exciting piece that is truly hard to put down. Recounting a story that began in and around Asbury Park in 1915, it is a ‘beach book' par excellence!"

Reflecting on the impetus to write this book, Professor Wright explained:

My great-uncle, Louis P. Beauregard, was killed as the result of an ice pick wound to his head which was thrown during an altercation and snowball fight. The tragedy occurred on December 18, 1915, on a small stretch of land just north of his hometown of Asbury Park, NJ, called Loch Arbour. Louis Beauregard, only 15 years of age, died four months later at the Ann May Hospital in Spring Lake, NJ, on April 15, 1916.

My family never mentioned him. He was known to me only through three remaining photographs that I found after my father passed away. While I knew Louis' sisters and brothers, my grandmother and other great-uncles, there was never any word about Louis.

The photographs led me to do some research, and I started with the archivist of Neptune Township. I wondered if there were any school records or death notices. She sent me a copy of a news article whose headline read, "Icepick Wound Causes West Grove Boy's Death." I was flabbergasted.

After more research, I started to put together what life was like for my distant relatives who grew up "down the shore" in Ocean Grove and in Asbury Park. I had a number of newspaper articles and personal photographs to paint a picture not only Louis but also of my great-grandfather, whose wife died of kidney disease in 1910, leaving him to raise six children.

One question lingered: Who threw the ice pick? An answer came when I found an article stating that two weeks after Louis died, a person stepped forward accepting responsibility. His name was Charles White of Asbury Park. He was only 12 years old.

What happened to him? What was his life like? What happens to a 12-year-old who commits manslaughter in 1915?

In this book, I pick up the story in 1978, using historical fiction to fill in the gaps and information on Charles White. Charles is on his deathbed and in response to the gentle, patient actions of a nurse, he reveals the tale he had never disclosed, now in a search for closure and peace.

Allan F. Wright lives in Basking Ridge with his wife and four children. He is principal of Koinonia Academy, a Catholic school in Plainfield.