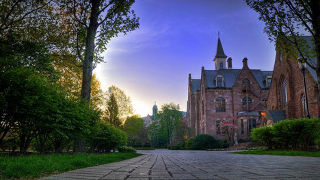 Beginning at 4:00 p.m., the colloquium will take place in the Beck Rooms in the Walsh Library.

This colloquium will consist in a dialogue between two contemporary theologians on the identity and mission of the Catholic University in today's world. John Henry Newman, who will be canonized a Saint by Pope Francis on October 13, was also the author of The Idea of the University, "The Most Influential book ever written in the English language about universities…" (George Farris, Multiversities, Ideas and Democracy, 2017).

About the Toth/Lonergan Endowed Professorship in Interdisciplinary Studies
The Toth/Lonergan Endowed Chair in Interdisciplinary Studies was created by the Center for Catholic Studies to honor two great scholars: Bernard Lonergan, S.J. and Deacon William Toth. Fr. Lonergan (1904-1984) was a renowned scholar whose classic works, Insight: A Study of Human Understanding (1957) and Method in Theology (1972) link faith and theology with the contemporary sciences and professions by way of a generalized empirical method (GEM). The twenty-five volumes of his Collected Works, published by the University of Toronto Press, include works on theology, the sciences and contemporary economics. Deacon Toth (1940-2008), who taught moral theology at Immaculate Conception Seminary and School of Theology, founded the Institute on Work within the Center for Catholic Studies, which later became the Micah Institute. Deacon Toth sought to link Catholic theology with the professions, especially business and law.

The Toth/Lonergan Endowment at the Center for Catholic Studies supports a scholar whose work will deepen and enhance the connections between the University's Catholic mission and scholarly and professional education. The establishment of this endowed position represents another important step in the University's implementation of the strategic plan, Strength to Strength.

For more information on the Toth/Lonergan Endowment Fund »

About the Center for Catholic Studies
Founded at Seton Hall University in 1997, The Center for Catholic Studies is dedicated to fostering a dialogue between the Catholic intellectual tradition and all areas of study and contemporary culture, through scholarly research and publications and ongoing programs for faculty, students, and the general public. In 2001, the Center conducted the annual faculty summer seminar, "The Core of the Core," which originated the present University Core Curriculum.

The Center also developed the undergraduate degree Catholic Studies Program with its major, minor and certificate. The Center continues to support the Program's students with scholarship aid, as well as ongoing co-curricular activities. Focusing on the central role of the faculty, the Center is the sponsor of regular Faculty Development programs, including lectures, seminars and retreats. The Center also administers two national faculty development programs: Collegium: A Colloquy on Faith and Intellectual Life, and The Lilly Fellows Program.