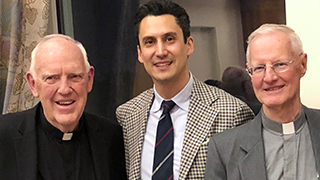 On Tuesday, October 23, the Center for Catholic Studies hosted its Annual Friends Dinner for the Toth/Lonergan Endowed Professorship in Interdisciplinary Studies to welcome the 2019 Toth/Lonergan Professor, Fr. Louis Roy, O.P., a Dominican scholar from Canada. After teaching at Boston College for 21 years, Fr. Roy now teaches at Dominican University in Ottawa. He will join the Seton Hall community for the spring 2019 semester where he will teach courses in the Catholic Studies Program and the Department of Religion.

Friends and supporters of the Toth/Lonergan Endowed Professorship were also joined by the inaugural Toth/Lonergan Professor, Mark Miller, Ph.D. As the first Toth/Lonergan professor at Seton Hall, Miller taught courses within the Core Curriculum, Honors Program, Law School, and Seminary. Miller's time on campus enriched the Catholic mission of the university by becoming part of the interpersonal "glue" that holds the university together. Miller continues to be of service to many faculty members and administrators.

The purpose of the Toth/Lonergan Professor is to enhance the connections between the university's Catholic mission and academic and professional education through teaching students from all areas of the university. Fr. Roy will have the opportunity to participate in the university's faculty development programs, which link Lonergan's generalized empirical method ("GEM") with the various disciplines. The Center for Catholic Studies is looking forward to having Fr. Roy on campus in the spring.

For more information, contact Erica Naumann at the Center for Catholic Studies at erica.naumann@student.shu.edu or 973-275-2407

About the Toth/Lonergan Endowed Professorship in Interdisciplinary Studies

The Toth/Lonergan Endowed Chair in Interdisciplinary Studies was created by the Center for Catholic Studies to honor two great scholars: Bernard Lonergan, S.J. and Deacon William Toth. Fr. Lonergan (1904-1984) was a renowned scholar whose classic works, Insight: A Study of Human Understanding (1957) and Method in Theology (1972) link faith and theology with the contemporary sciences and professions by way of a generalized empirical method (GEM). The twenty-five volumes of his Collected Works, published by the University of Toronto Press, include works on theology, the sciences and contemporary economics. Deacon Toth (1940-2008), who taught moral theology at Immaculate Conception Seminary and School of Theology, founded the Institute on Work within the Center for Catholic Studies, which later became the Micah Institute. Deacon Toth sought to link Catholic theology with the professions, especially business and law.

The Toth/Lonergan Endowment at the Center for Catholic Studies supports a scholar whose work will deepen and enhance the connections between the University's Catholic mission and scholarly and professional education. The establishment of this endowed position represents another important step in the University's implementation of the strategic plan, Strength to Strength. For more information on the Toth/Lonergan Endowment Fund, contact Monsignor Richard Liddy at Richard.liddy@shu.edu.

Louis Roy, O.P., holds a Ph.D. from the University of Cambridge. After teaching for twenty-one years at the Jesuit University of Boston College, he is now Professor of theology at the Dominican University College in Ottawa. He has published books in English, French, Spanish, and Vietnamese. He is interested in intellectual, affective and mystical approaches to God, in religious experience and revelation, in interreligious dialogue, and in the relations between Christianity and cultures.

Mark T. Miller, Ph. D., (University of San Francisco), a leading authority on the life and work of Bernard Lonergan, was the inaugural Toth/ Lonergan Professor at Seton Hall in 2017-2018. Professor Miller helped enhance the connections between the University's Catholic mission and academic and professional education through teaching students in the Core Curriculum, Honors Program, Law School and Seminary. He will also participated in the University's faculty development programs, which link Lonergan's generalized empirical method ("GEM") with the disciplines.

About the Center for Catholic Studies

Founded at Seton Hall University in 1997, The Center for Catholic Studies is dedicated to fostering a dialogue between the Catholic intellectual tradition and all areas of study and contemporary culture, through scholarly research and publications and ongoing programs for faculty, students, and the general public. In 2001, the Center conducted the annual faculty summer seminar, "The Core of the Core," which originated the present University Core Curriculum. The Center also developed the undergraduate degree program in Catholic Studies with its major, minor and certificate, which in 2012 became the Department of Catholic Studies. The Center continues to support the Department with scholarship aid and its ongoing program of co-curricular activities.