Meg Reilly '12, initially took a conventional path to her marketing career, accepting a position at Y&R Global, one of the world's biggest advertising networks, after graduation from the Stillman School of Business. Until one day, when she quit her day job to pursue entrepreneurship at top speed and race yachts around the world. "When you think in terms of 'I can' instead of 'I can't,' a lot can happen," the Scotch Plains, N.J. native says.

Reilly will speak about her adventures both as an entrepreneur and sailing the oceans of the world on at 7:00 p.m. on Tuesday, October 22 in the Business Faculty Library, Jubilee Hall. All students and faculty are invited to the event which is sponsored by the student Entrepreneurship and Women in Business clubs, in partnership with the Center for Entrepreneurial Studies. Susan Scherreik, the Center's Director, says: "I can think of no better role model than Meg to inspire our students and help us to celebrate Women Entrepreneurship Week. She is fearless young entrepreneur who challenges herself and others to be the best they can be, while doing good in the world," Scherreik adds. Women Entrepreneurship Week is celebrated at Seton Hall University and some 150 other higher education institutions in 38 U.S. states and in 23 countries.

"I am really looking forward to coming back to SHU to share my story and inspire some dreamers into doers," Reilly says. "I had a crazy dream, and I made it a reality. It hasn't been easy being a young, female entrepreneur in a male-dominated field, but it's possible. I didn't even know how to sail when I graduated, so there you go—anything is possible!"

In 2013, at the age of 23, Reilly embarked on a year-long, 43,000 mile ocean race, circumnavigating the globe. After winning the Clipper Round the World Race, the novice sailor was hooked. "I compare the appeal of ocean racing to why people watch scary movies and like roller coasters—it scares you into life," Reilly said. The race is the longest ocean race in existence, and during that epic year Reilly visited 15 ports on six continents. 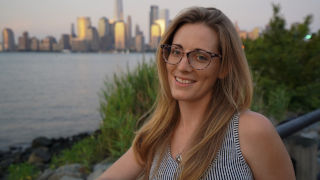 Reilly credits Complementary Connections—a business she started while at Seton Hall University—with allowing her to make the connections that led to her ocean racing success. "My unique marketing strategies through partnerships have brought together top brands in impressive events and engagements around the world," Reilly says. "It's how I was able to obtain a sponsorship to participate in the Clipper Round the World Race!" In another favorite success story, Reilly recalls how she launched a STEM Summer Sailing Camp program between Offshore Sailing School and the Liberty Science Center in Jersey City. "My true passion is to shift the business paradigm from competition to collaboration with each new partnership I forge through Complementary Connections," she adds.

Reilly hatched the idea for Complementary Connections during a Junior Year Mentoring Project which she was required to complete as a member of the Gerald P. Buccino '63 Center for Leadership Development. Reilly worked one-on-one with Wakefern Food Corporation President Joe Sheridan on her assignment to development a new branding solution. Reilly later recognized that her project had the potential to become a profitable business. So as a senior she pitched her savvy business idea at the Seton Hall University annual Pirates Pitch startup contest and won second place in the competition. Reilly credits the cash award she received as instrumental in helping her to launching Complementary Connections.

Reilly welcomes everyone to follow her ocean racing team on social media at @oceanracers to get a look at her life in long haul racing on the high seas.